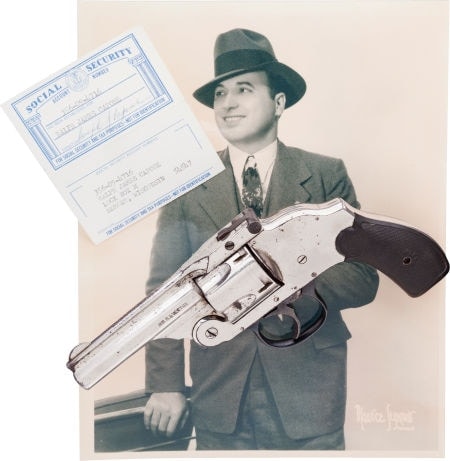 Capone, his gun, and his Social Security card.

Heritage Auctions has just listed a very special Harrington & Richardson top-break revolver that once belonged to none other than Al Capone. While he’s more frequently remembered for his hat and cigar, there’s little doubt that he knew his way around guns, too.

The revolver is a Harrington & Richardson Second Model chambered for .38 S&W with a 3 1/2-inch barrel. These were popular pistols at the time and H&R made them by the truckload. They can still be found today, usually for less than $200. 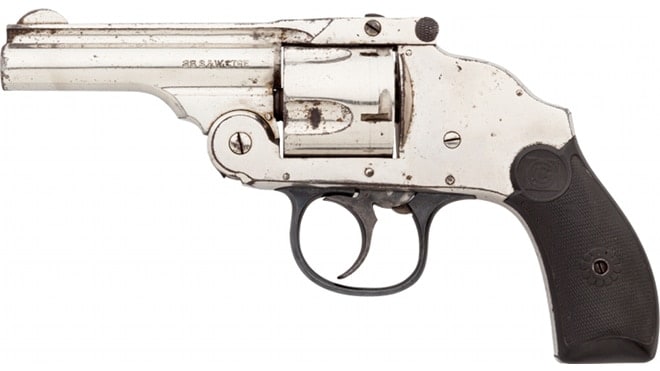 The estimate may be on the conservative side. Capone’s property, especially his guns, are hard to come by. Combined with his legendary notoriety, Capone’s guns fetch high prices at auction.

Capone rose to a position of fame as a bootlegger, along with his syndicate, the Chicago outfit, which eventually became known as “The Capones.” Running underground alcohol during the Prohibition in Illinois was widely held to be a public service, although his reputation sank after the St. Valentine’s Day Massacre.

The St. Valentine’s Day Massacre was a gang-related shooting that lead to the ascension of the South Side Italian Gang over the North Side Irish Gang in Chicago in 1929. The massacre allowed the Capones to take over control of the city’s organized crime but cost Capone himself his reputation as a then-modern-day Robin Hood.

A Colt Police Positive .38 Special that once belonged to Capone sold for more than $100,000 just a few years ago at Christie’s.

Even though the Colt was a higher-quality piece in better condition, it’s the fact that this was Capone’s pocket gun that will move people to bid.

The gun is not in bad condition, either, not by a long shot. While the finish has flaws and there is some rusting and pitting on the bore, these were not heirloom guns in the first place. This particular Second Model is in excellent condition by H&R standard given its age. Most of these revolvers show many more signs of aging.

Judging by the serial number the gun was made somewhere between 1913 and 1915. It comes with a letter from Madeleine Capone Morichetti that states it belonged to Al Capone. 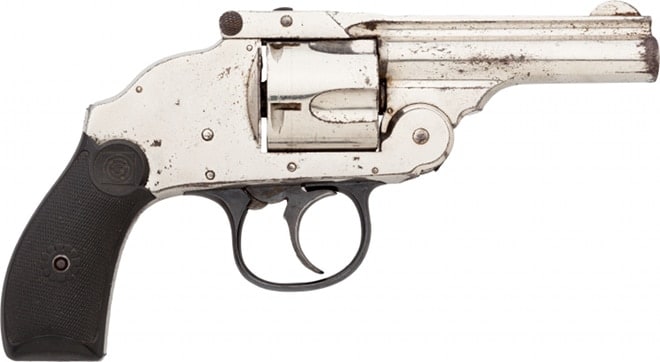 While .38 Smith & Wesson isn’t a common caliber today, it can still be found and loaded for, and it is a low-pressure round that isn’t going to put much if any appreciable wear on the gun.  This is one historical piece that is on the cusp of shootability, if anyone were to do so.

If you’re interested in placing a bid or just looking at a piece of history head over to the auction page, there are more details and high-resolution photos available.