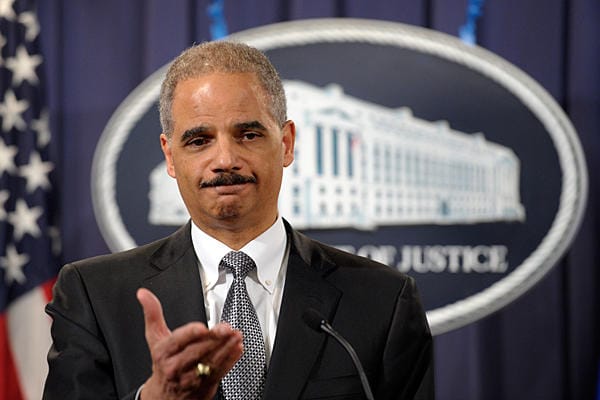 The Federal Deposit Insurance Company has labeled companies in the gun and ammo industry “high risk,” which is theoretically arming the Justice Department with the power to limit or cut off their access to working capital.

This story was reported extensively this week by the Washington Post, which discovered that the FDIC has, since 2011, urged banks to better manage the risks of their merchant customers who employ payment processors, such as PayPal, for credit card transactions.

In tandem with this guidance from the nation’s guarantor of banks, the DOJ in 2013 launched a program, along with the Consumer Financial Protection Bureau, known as “Operation Choke Point,” which focuses on the transactions of these same payment processors.

“This administration has very clearly told the banking industry which customers they feel represent ‘reputational risk’ to do business with,” said Peter Weinstock, a lawyer at Hunton & Williams LLP. 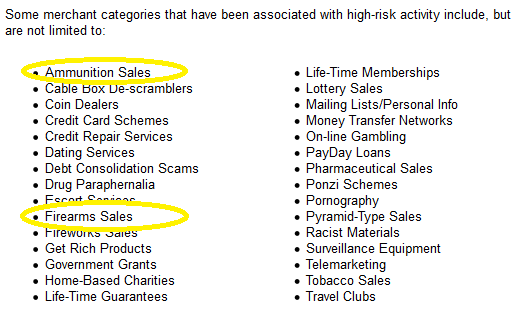 The list of 30 “high-risk merchant categories” maintained by the FDIC since 2011. (Photo credit: FDIC.gov)

Many argue that this has directly effected gun makers and retailers ability to obtain credit and financing.

In 2013, for example, GE Capital quietly began cutting off lines of credit to gun shops nationwide. The year before, both McMillan International and American Sprint Arms were dropped by Bank of America.

BoA at first defended its actions by claiming American Sprint sold guns illegally online, although all transactions were, by law, conducted through Federal Firearms License holders.

“This seems to be happening with greater frequency and to many more dealers,” said Joe Sirochman, owner of American Spirit Arms.

This has brought gun-rights groups as diverse as the National Rifle Association and Jews For The Preservation of Firearms Ownership out in opposition of this increase in federal banking scrutiny.

“Gun control proponents, having achieved only limited success in the legislative arena, have without question sought additional avenues for restrictions through the business community,” stated a report from the NRA’s Institute for Legislative Action earlier this month on Operation Choke Point.

However the NRA urges caution, by saying, “While all of these developments deserve close attention, we have not substantiated that they are part of an overarching federal conspiracy to suppress lawful commerce in firearms and ammunition, or that the federal government has an official policy of using financial regulators to drive firearm or ammunition companies out of business.”

Meanwhile, Operation Choke Point has also garnered Congressional attention. In January, Rep. Darrell Issa, (R-Calif.), who chairs the House Oversight Committee asked Attorney General Eric Holder for more information that led to a hearing last month in front of the House Committee on Financial Services with Choke Point at the center of discussion.

“It’s pretty clear,” says Rep. Steve Stockman, (R-Texas), “that unless Congress uses the power of the purse to stop him, Barack Obama will use his ‘phone and his pen’ to ban guns by cutting off money for gun manufacturers and dealers.”