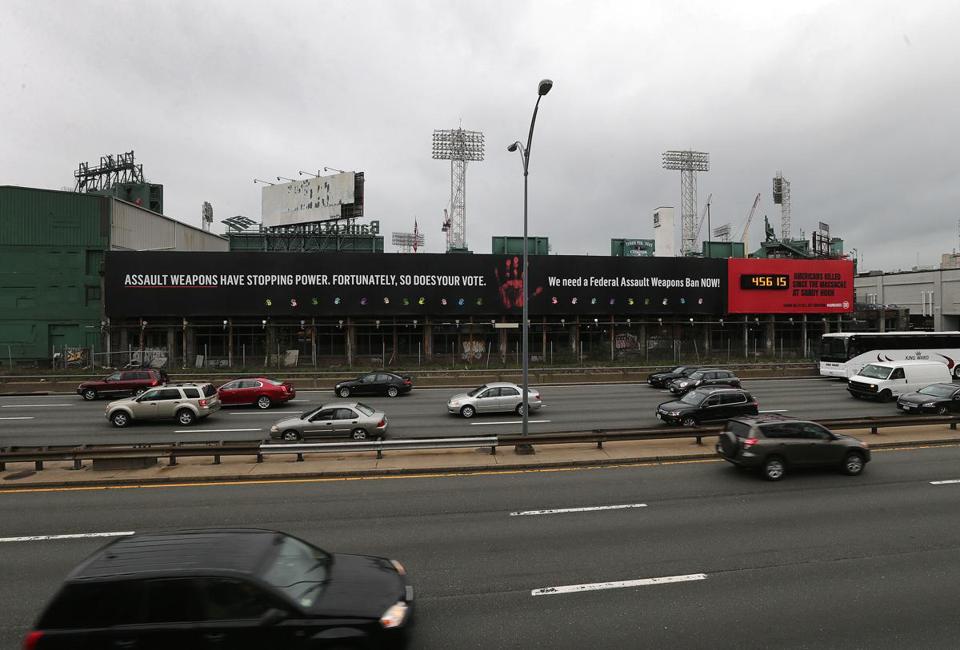 It’s been a 250-by-20-foot fixture of the Massachusetts Turnpike for New England motorists for many moons but now one of the largest, most conspicuous and provocative billboards in Boston is in need of a new home, The Boston Globe reports.

The famous or infamous, depending on one’s perspective, pro-gun control billboard has been on the side of a Lansdowne Street parking garage located behind Fenway Park since 1995.

But given that John Rosenthal, the owner of the garage and the chairman of Stop Handgun Violence, the organization responsible for maintaining the sign, sold the parking structure in 2013 to the Boston Red Sox organization, that prime advertising space is no longer under his control.

Rosenthal has until March to find a new home for his beloved billboard, which he called “the proudest accomplishment” of his life.

“I’m hopeful that we’ll find a property owner who shares our concern about gun violence,” Rosenthal said. “We cannot afford to pay a high rent, and the billboard will just cease to exist if that’s the only option.”

While it’s difficult to know for sure whether the sign has had any measurable impact on the public’s perception of firearms and gun ownership, what is clear is that approximately 150,000 vehicles pass by the sign every day, a lot of wandering and perhaps impressionable eyeballs.

Currently, the sign tracks the number of U.S. gun deaths since the mass shooting at Sandy Hook Elementary School in Newtown, Connecticut, which as of Monday was “45,864,” according to the sign.

In honor of the 20 first graders who were slain during that unspeakable tragedy, the sign has 20 collared handprints along with a message that reads, “Assault weapons have stopping power. Fortunately, so does your vote.”

In the past, the billboard has displayed various messages, ranging from a mock ransom note from the NRA, declaring, “We have your President and Congress,’’ and one stating “Welcome to Massachusetts — You’re More Likely to Live Here’’ professing Plymouth has “the most effective gun laws” in the nation to less satirical ones like “Shame on Congress,” a reaction to the failure by lawmakers to enact tougher federal gun laws.

Rosenthal would ideally like to keep the sign where it is but the Red Sox organization has not commented on the matter, leaving the real estate developer to scout for new locations. As of right now, he has some ideas but nothing concrete.

Yet, despite being up in the air about where his billboard will end up, it appears he has the backing of Boston Mayor Martin J. Walsh who said he supports keeping it in Beantown, calling it an “an eye-opening reminder of the tragedy of the crimes being perpetrated with guns across our nation.”

Likewise, Robert DeLeo, the speaker of the state House and a pro-gun control supporter, expressed his profound reverence for the billboard.

“There is not a time when, if I’m on the Pike or walking to the ballpark, I will not look at that billboard,” said DeLeo (D-Winthrop). “It’s very simple, but I can’t think of another more powerful [sign] that I’ve ever seen.” 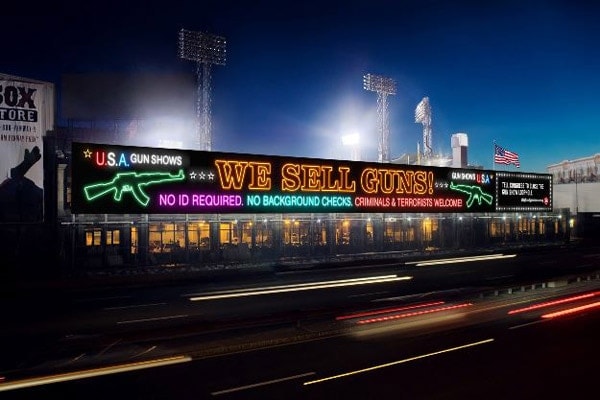 Of course not everyone believes in the sign’s ability to win hearts and minds.

“It’s a waste of time and money on a billboard that hasn’t solved any problems,” said Jim Wallace, executive director of the Gun Owners’ Action League, the Massachusetts affiliate of the National Rifle Association.

“When he talks about the NRA buying Congress or banning assault weapons at gun shows because terrorists are buying them, I think they’re meant to be inflammatory and . . . don’t exactly seek to solve problems,” he added.

To his objectors at the nation’s gun lobby, Rosenthal said “We have become the NRA’s worst nightmare,” adding “Gun laws work, and look no further than urban, industrial Massachusetts if you want to reduce gun violence nationally.”

With all that having been said, do you have any ideas on where Rosenthal can put his billboard?