Moms notch another victory, Chipotle says 'no' to open carry 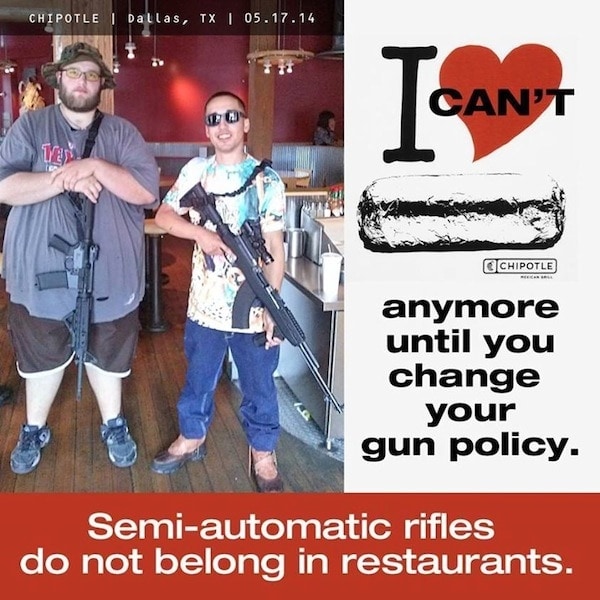 Moms Demand Action created this flier along with a petition to garner attention for their cause (Photo credit: Facebook)

Chipotle was pressured to issue a statement on the matter after Moms launched a petition in the wake of a recent open-carry demonstration at a location in Texas.

“Recently participants from an ‘open carry’ demonstration in Texas brought guns (including military-style assault rifles) into one of our restaurants, causing many of our customers anxiety and discomfort,” said a spokesman for the Mexican fast-food chain in a press release.

“Because of this, we are respectfully asking that customers not bring guns into our restaurants, unless they are authorized law enforcement personnel,” it went on.

Shannon Watts, the pro-gun control group’s founder, applauded the timely response by Chipotle’s leadership, which previously felt that it was enough for stores to simply comply with state and local laws regarding open and concealed carry.

“Moms are grateful to Chipotle for taking quick action today to stand up for the safety and security of our families,” said Watts, in a press release.

“Chipotle’s statement that firearms are not welcome in their restaurants is bold and meaningful – it shows that you can support the Second Amendment while also taking reasonable measures to ensure that Americans are safe and secure in the places we take our children,” added Watts.

Aside from the fact that its lawful for one to openly carry a long gun in public, Moms big beef with Texas is that it does not have universal background checks for firearm transfers made between private buyers and sellers. Moms main legislative objective is to see that all firearm transfers, in all 50 states, undergo an Federal Firearms Licensee-facilitated background check.

While that goal remains to be had, Moms is making progress on the corporate front by not only encouraging food chains like Chipotle, Jack in the Box and Starbucks to come out make statements discouraging open and concealed carry at their respective locations, but also getting social media giant Facebook to retool it’s policies on firearm sales and trades coordinate through its online platform.

Critics of Moms success would argue that their Chipotle, Jack in the Box and Starbucks have not outright banned firearms, but merely issued nonjudgemental pleas asking folks to keep their firearms at home. Moreover, that it’s business as usual on Facebook gun sales forums, even after the new polices were enacted.

Nevertheless, one can argue that Moms — with aid from the backlash and media attention from open carry demonstrations — is forcing corporate America to put concealed and open carry rights in their crosshairs, something many of these multi-billion dollar companies were happy to avoid doing in the past.