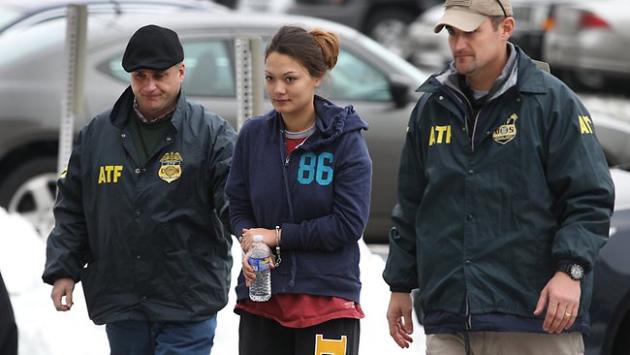 Dawn Nguyen, center, was convicted of straw purchasing guns that were used to ambush a team of New York firefighters. (Photo credit: AP)

On Tuesday, the Brady Center to Prevent Gun Violence filed suit against Gander Mountain contending the company acted negligently in selling guns to a straw buyer that were later used to ambush a team of New York volunteer firefighters.

Dawn Nguyen at a Gander Mountain store in Henrietta, New York, bought the firearms in question, a .223-caliber rifle, and a 12-gauge shotgun, in 2010 on behalf of her neighbor, William Spengler Jr. The two entered the store together and Nguyen paid cash, given to her by her neighbor, for the guns.

Spengler, a convicted felon barred from owning firearms, subsequently used the rifle in a Dec. 24, 2012 attack on four firefighters who were responding to a house fire he created as a trap. Two of the volunteers later died.

Nguyen, now 25, was convicted last month of felony charges that include falsifying a business record and giving the guns to a convicted felon.

“As a direct result of Gander Mountain’s unlawful and negligent conduct, aided by the illegal conduct of Nguyen, Spengler, a convicted murderer, acquired the Assault Rifle which he later used to kill or seriously injure four firefighters volunteering their services on Christmas Eve,” states the lawsuit, filed by the Brady Campaign Tuesday in the New York Supreme Court, Monroe County.

The complaint argues that the sale of multiple firearms in one purchase, more than one person entering the store together, and purchases made in cash should have been indicators of a possible “straw purchase” to Gander Mountain.

A straw purchase is one in which a gun is bought for someone who is prohibited by law from possessing one or for someone who does not want his or her name associated with the transaction. Under federal law, it is illegal and subject to up to 10 years in jail and a $250,000 fine. The National Shooting Sports Foundation and others in the firearms industry have long supported a campaign to help mitigate straw purchases.

Besides the Gander Mountain, both the estate of Spengler and Nguyen herself are named with the plaintiffs being the two surviving firefighters and the families of the two who were killed.

“These facts suggest that the loss we have endured could have been avoided,” the plaintiffs said in a statement released in conjunction with the lawsuit. “If only the store had acted responsibly.”

Gander Mountain, in response to the lawsuit, issued the following statement late Tuesday to WHEC news.

The men and women of Gander Mountain continue to express deepest sympathies for the victims of the tragedy, and for their families.

Gander Mountain has been forthcoming, cooperative, and helpful in the investigation of these crimes. Store records and law enforcement have confirmed that the firearms in question were purchased with all proper documentation and in compliance with all local, state, and federal regulations.

The individual who purchased the firearms intentionally deceived Gander Mountain, was tried for her crimes, was convicted, and is currently serving a significant prison term.

Gander Mountain, as a member of the National Shooting Sports Foundation, is renowned for its commitment to safety, its respect for the law and its good standing in the outdoor sporting community. We will vigorously defend ourselves in this matter.