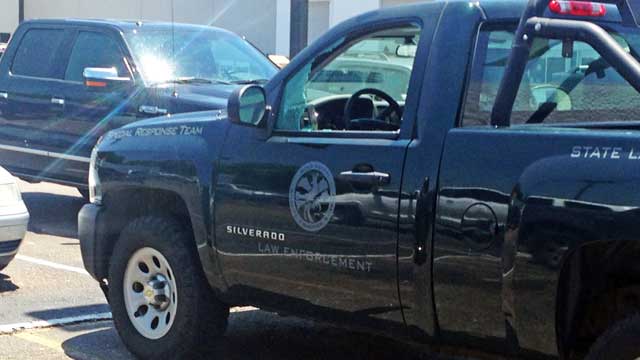 A Mississippi Department of Wildlife, Fisheries and Parks officer’s unit was broken into and his AR-15 stolen, bringing to four the number of guns stolen in recent weeks in Jackson from law enforcement. (Photo credit: MS News Now)

These guns, including two AR-15s as well as an Heckler & Koch MP-5 submachine gun stolen in January from another agency’s vehicle, have all been taken in a series of car burglaries in the Jackson area.

“These are powerful rifles, and in the hands of these crooks, it could be dangerous,” said MDWFP spokesperson Jim Walker. “It’s imperative that we catch these guys, and I’m confident we will.”

Walker advised that the auto burglars seemed very deliberate in their actions and no other items were stolen besides firearms.

“These guys know what they’re doing,” Walker said. “They know how to, which vehicles to mark, and how to compromise the locks.”

The latest burglary occurred during daylight hours on May 15 when a MDWFP conservation officer assigned to the state’s special response team went to Academy Sports in Jackson. When the officer came back to his vehicle, the driver’s side window was smashed and the state-issued AR-15 .223 caliber rifle was missing, pried from its vehicle lock.

This comes just two weeks after thieves struck MDWFP officers’ vehicles parked at an archery competition at the Cabot Lodge near Millsaps College, six miles from the scene of the most recent burglary. In that incident, another AR-15 and a handgun were stolen from locked units.

In January, a select-fire capable HK MP5 was stolen from a Jackson Police Department SWAT member’s car parked at his home which, like the MDWFP guns, has not been recovered.

The tactic of breaking into vehicles believed to have firearms is not unique to the Magnolia State.

Just this week, gun show attendees in Florida came out to find their car windows smashed and guns missing. In a similar incident in North Carolina, police recently arrested a group of suspects who officers say broke into cars specifically looking for firearms. Officers say that the subjects looked for various gun-related decals and bumper stickers on the vehicles to pick their targets.

As for the missing Mississippi weapons, officials have not publicly stated that the string of recent thefts are related, but are saying that they are cooperating with all agencies to seek a speedy resolution to the cases.

We are 100% engaged in this matter and we feel like it will have a positive outcome,” said Walker.