‘It’s all fun and games until the cops show up’: Bank robber captured wearing prophetic T-shirt 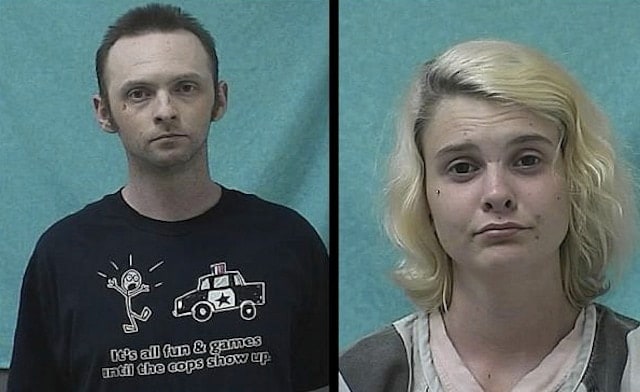 Rocky Fisher, left, and Jennifer Balfe robbed a bank and then tried their luck at a casino. When police arrested them, Fisher was wearing a seemingly prophetic T-shirt.

Two Idaho bank robbers were captured in a motel Sunday, several days after their crime, and one of the suspects was wearing a very prophetic T-shirt that read, “It’s all fun and games until the cops show up.”

Rocky Fisher, 35, and Jennifer Balfe, 19, robbed a bank in Cottonwood, Idaho, on Friday. Now in possession of a large sum of cash, they went to a casino to try their luck took. But their luck ran cold when someone recognized them and alerted police, Oregon Live reports.

They were arrested and charged with suspicion of robbery, burglary and grand theft.

Lewiston police officials said they are investigating to determine if Fisher and Balfe are also responsible two bank robberies in Ontario, Oregon. One on May 9, and another on May 14.