Aero Precision and Lantac USA have unveiled new modular handguard systems for AR-15-type rifles that feature anti-rotation systems to ensure a perfect fit over the lifetime of the rifle. With these handguard systems it’s possible to guarantee a zero with forward-mounted optics and laser sights even after sustained use and abuse.

With optics like red dot and prismatic sights and laser aiming systems becoming common accessories, users are finding one major problem with many AR-15 handguards: they rotate in place and don’t hold a true zero.

Both systems have their own distinct advantages. While both feature proprietary systems, the Aero M4E1 sports universal KeyMod or Magpul M-LOK slots on the handguard for use with all sorts of accessories and adapters. The Spada uses an in-house screw pattern for use with accessories but also has a modular front end for adding rail extensions for things like lights and laser sights in front of the handguard.

The M4E1 uses a vented barrel extension with an integrated heat sink for better thermal performance while the Spada has a discrete gas key nut that doesn’t need to be timed with the gas system and also guarantees a solid anti-rotation fit.

Right now only Aero has announced the prices for these handguards, which vary between $275 and $343, which includes the upper receiver. Aero will also be offering the M4E1 with handguards ranging from 12 to 15 inches with a variety of different hard-anodized finishes like flat dark earth, burnt bronze and olive green. Currently Aero is offering a pre-sale on these sets with delivery to follow in a couple of weeks. 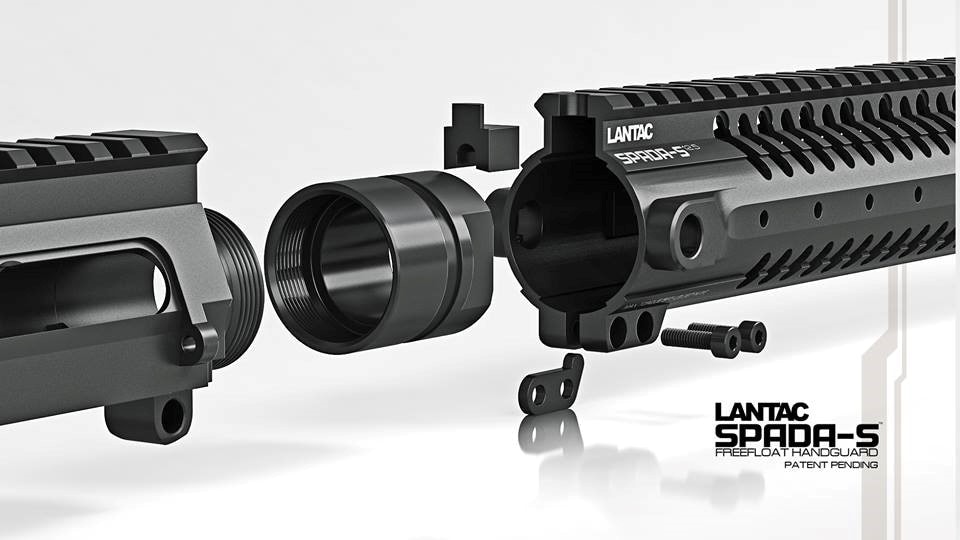 The Spada will be launched with a 12 1/2-inch model with other length options to follow.

Functionally the two systems are very different, with the M4E1’s barrel extension and the Spada’s gas key nut but the results are the same: a handguard that stays in place, without resorting to wings or tabs that index the handguard against the upper externally.

The Spada is designed to be slim and lightweight where the M4E1 has a generous internal diameter for use with suppressors.

Either through handling or recoil, traditional railed handguards get knocked out of alignment with the upper receiver and bore of the rifle, causing the rail-mounted accessories to get knocked out along with it. This is a non-issue for things like flashlights but for precision parts like optics means worlds.

The standard work-around for this is to only mount these accessories to the flattop rail integral to the upper receiver, but space there is limited and inflexible.

By having an anti-rotation handguard installed it’s possible to place optics with long or infinite eye relief farther away from the eye. This provides a less obstructed field of view with red dots as well as making the reticle smaller for precision shooting. It also makes it possible to use standard rings and not cantilever mounts with scopes that require mounting farther forward than what just a railed receiver allows for.

It also makes iron sights that much more accurate.

This also makes it much easier to run with multiple optics, such as a variable-power rifle scope on top with an offset red dot sight mounted in front of it for quick up-close shots.

The fact that these will guarantee a solid zero with lasers and other accessories is an added bonus.

Both of these systems have all the advantages of more conventional free-floating handguards. They don’t come into contact with the barrel, which makes the gun more accurate in general and they also tend to run cooler with improved ventilation. These make a big difference for slow and fast shooting.

For more information hit up the Aero M4E1 product page. Lantac USA doesn’t have a page up for their handguards just yet so for now head over to their Facebook page for more details.