Detroit Police Chief James Craig’s stance on residents “having the ability to protect themselves” received national attention after his appearance on the cover of a National Rifle Association magazine.

Craig was featured in a story called “A Show of Courage in Detroit,” which ran in the NRA-produced ‘America’s 1st Freedom’ magazine. In the article, the police chief talked about his beliefs that homeowners should be able to use firearms to protect themselves and others, Click on Detroit reports.

Craig also noted many recent home invasions have been thwarted by armed residents, saying it appears to be something of a trend. 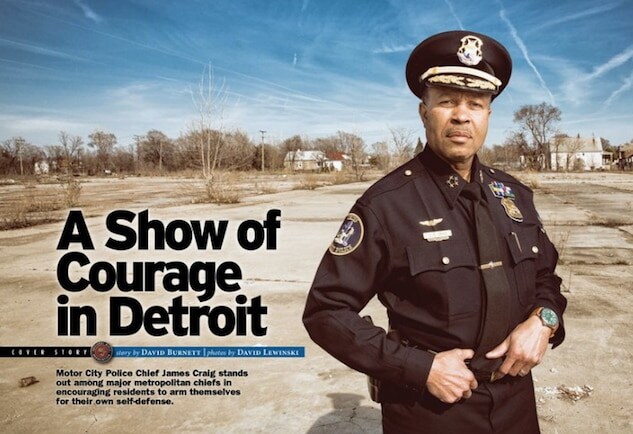 Detroit Police Chief James Craig said he was not an advocate for violence, but that he does believe residents have a right to be armed and to protect themselves from great bodily injury and death.

He went on to mention the number of concealed pistol license holders in the city has increased over time, adding that he doesn’t condone violence, but self-protection.

“This is not about inciting vigilantism, because in my view when you talk about vigilantism, you’re talking about someone who has made a decision to do law enforcement’s job – go out and enforce the law,” Craig said in the article. “This it not that at all. This is about self-defense, protection, an imminent threat to life, very different response.”

Some will see his stance on armed residents as an admission that the police cannot adequately protect the public. But that’s not the case, he said during a conference held Monday afternoon.

“Critics will say, ‘Well, chief, are you saying that the Detroit Police Department can’t do its job?’ That is absolutely an untrue, inaccurate statement,” he said. “Police officers cannot and will not be on every corner, in front of every house, every business in the city. That’s just not realistic.”

During the conference, Craig also addressed  his fellow police officers, charging them to help find ways to “de-escalate the violence spawned by the Stand Your Ground principle.”

According to Huffington Post, Detroit’s murder rate dropped 14 percent in 2013. The city recorded 333 homicides last year, and 15 justified homicides. And violent crime has dropped 15 percent in the first quarter of 2014, when compared to last year.

In the end, Craig said he was “not an advocate for violence. But I am an advocate for when faced with a dangerous situation – one that offers or presents an imminent threat to life, or a threat of great bodily harm – that one protect themselves.”

Check out the full conference below.