Actually, the gun store is a joint effort, with a eye towards semi-custom firearms. With help from companies like Krebs Custom and Definitive Arms, Tim from MAC and his supplier David have joined forces to make Copper Custom Armament.

“We had the idea about a year ago,” David told Guns.com. “We just launched a couple Fridays ago.”

Copper has a nice catalog of professionally-tuned guns that are a big step ahead of their factory counterparts. The idea is to offer premium, upgraded versions of a small number of duty rifles and pistols. They’re like the Apple store but with evil black rifles. 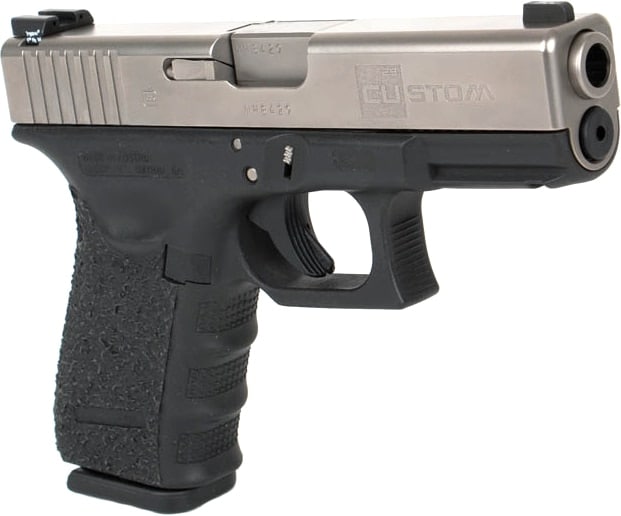 And a line of in-house Glock and M&P pistols.

Copper Custom has their own take on these common and popular service pistols, carrying several models of Glock pistols and one type of M&P, at least at this time. They will be expanding in the next few weeks to offer a wider selection of tuned and factory guns. Eventually Copper will carry a full line of firearms including shotguns.

The Glocks are the most customized. The upper assemblies are refinished with Robar NP3. This coating is one of the best scratch-, wear- and corrosion-resistant finishes on the market. Robar also recontours the grips. Copper carries two different Robar grip styles, one with a simple undercut trigger guard to prevent “Glock knuckle” and a more aggressive package with a complete grip reduction and stipple job.

They also offer their Glock 17 with an Atom mini red dot sight setup and suppresor sights. Depending on the configuration their Glocks run between $999 and $1,299, which is considerably less than what it would cost for an individual to put a similar gun together with these features.

For a bit less, $799, their upgraded M&P pistol may appeal to a wider audience. They take a standard M&P-9 and install Trijicon HD sights and an Apex Tactical SD trigger. Both the sights and the trigger are considered by many to be the best upgrades for the M&P as the ergonomic grip with its interchangeable backstraps aren’t in need of any reduction or undercutting work.

The Tavor is easily the most popular bullpup in America. The Israeli bullpup is even changing hearts and minds, getting people who have said they’d never own a bullpup to reconsider their position. Given the Military Arms Channel’s fondness for these guns it’s no surprise that Copper Custom would stock them.

They are one of a small number of IWI U.S. law enforcement suppliers as well.

They carry a handful of different Krebs Custom AKs. Krebs Custom is one of the most skilled custom shops in the AK world and they take traditional wood-stocked Vepr rifles and carbines and build them into some of the sexiest modern rifles out there, complete with railed KeyMod handguards, folding and telescoping stocks, Magpul furniture and custom in-house sights.

A Krebs Custom rifle will set you back a bit over a plain-Jane Vepr. Prices start at $1,799.

The Definitive Arms 5.56 NATO/.223 Remington Veprs are more affordable and more traditional, with standard furniture or a combination of a wood handguard and a side-folding Bonesteel stock.

What makes the Definitive Arms rifles so appealing is the magwell conversion. These rifles accept standard AR-15 magazines and are built with A2-style flash hiders.

The barrels have been tuned and the thread repatterned to 1/2×28 for use with standard AR-15 muzzle devices. The threading is also made concentric to the bore for use with suppressors. These rifles start at $1,399.

Copper Custom carries more than what is currently listed on their website. Right now they want to take things slowly and make sure everything runs smoothly. If you want to stay up-to-date with Copper and get a peek at some of their other products be sure to check out their Facebook page.

We look forward to seeing Copper Custom Armament grow and can’t wait to see what’s up their sleeve in the coming weeks and months.