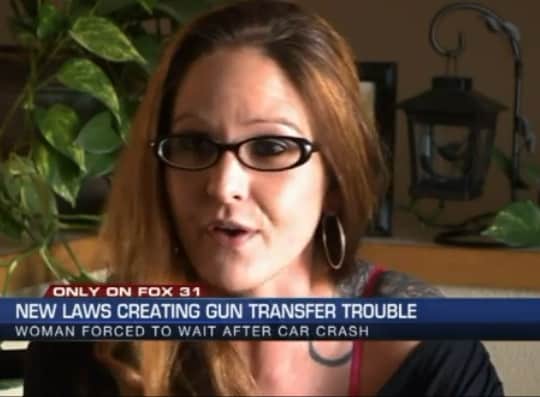 Colorado resident Sara Warren had her gun given to police after a car accident, forcing her to spend two months of her life getting it back due to the state’s new background check requirements. (Photo credit: Fox 31 Denver)

Sara Warren had her Ruger SR9 turned over to the Fort Collins Police Department after a car wreck in March, and due to the state’s strict new background check laws, she just got it back Wednesday.

Warren, who was traveling for work on March 26, 2013, was involved in an automobile accident. Warren’s purse, with her legally owned 9mm pistol inside of it, was given to the police by hospital security who received it from the paramedics that had brought her in.

Although the Fort Collins PD soon cleared her to get the gun back, they were unable to give it directly to Warren due to the state’s new laws.

These laws, which require mandatory background checks for virtually all firearms transfers, prevented the department from legally giving Warren her property back without approval from the Colorado Bureau of Investigation after a background check from a Federal Firearms Licensee.

To help expedite the process and accommodate the department, she offered to bring the necessary forms to the agency and have them processed by a FFL at her expense — an offer that was flatly rejected.

“At that point,” she recalls, “I knew I wasn’t going to get my gun back. Nothing seemed to be working.”

Warren’s gun was not the only firearm in the custody of the Fort Collins PD. Since July 2013, when Colorado’s new law went into effect, the agency has impounded no fewer than 24 guns from their rightful owners during investigations.

“We had an opinion from our city attorney and district attorney not to return firearms without a (Federal Firearms Licensee) check, and we don’t have an FFL person in our office,” said Fort Collins deputy chief Jim Szakmeister.

After calls to the city attorney and police department went unanswered, Warren then contacted the local newspaper, the Loveland Reporter Herald, whose staff was soon informed that the city planned to release the guns by May 21.

To relieve themselves of this armory, Fort Collins PD met individually this week with these gun owners, including Warren, at Jax Outdoor Gear, an area FFL holder who handled the transfers between the department and the owners.

However, this work-around solution is temporary, pending input from the city attorney, advised agency representatives.

“We’re trying to reach out again and find out if that position has changed. Ultimately, if we can get our own FFL, that would be the remedy to this situation and satisfy our compliance to the law,” Szakmeister said Wednesday. “We’re still working on that.”

Warren was there waiting for her firearm, which she carries for personal protection.

“I was the first and there were so many guns in there,” Warren said. “I heard a story there about one woman who had her gun there since 2013.”