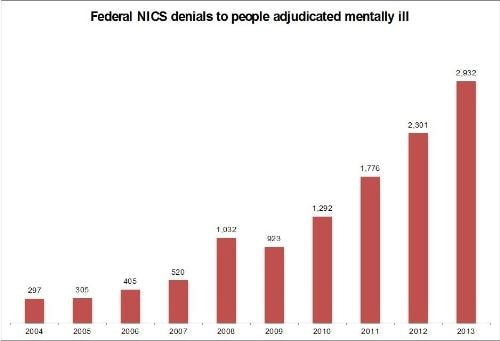 There is good news for both gun owners and pro-gun control advocates, according to a new report released by Everytown for Gun Safety on Thursday.

Thanks to activism by both the National Shooting Sports Foundation and Mayors Against Illegal Guns, which along with Moms Demand Action for Gun Sense in America makes up Everytown, the number of mental health records in the Federal Bureau of Investigation’s National Instant Criminal Background Check System has tripled in less than three years.

NICS is what gun dealers or federal firearm licensees use to run background checks on prospective purchasers to ensure that the buyer is not a “prohibited person,” i.e. minor, felon, mental defective, domestic abuser, illegal immigrant, among others.

To account for the increase in reporting, MAIG credited the awareness raised by its 2011 study titled “Fatal Gaps: How Missing Records in the Federal Background Check System Put Guns in the Hands of Killers,” which disclosed the number of mental health records each state reported to NICS.

Given that some states were arguably derelict in their reporting, submitting less than 100 records per year in some cases, it sparked lawmakers to act on the matter and support legislation to ensure that mental hospitals and courts were forwarded records to NICS in a timely manner.

With three times as many records in NICS, MAIG states that “65 percent more dangerously mentally ill individuals who tried to buy guns were blocked from purchasing guns compared to just two years prior.”

“The news that 65 percent more gun sales have been blocked to seriously mentally ill individuals is proof of how important it is for states to submit their records and close the potentially fatal gaps in our background check system,” said John Feinblatt, President of Everytown for Gun Safety in a press release.

“We’ve been calling attention to this problem for years – many states have heard our call but there are still too many states that are not doing their part to ensure that dangerous people cannot get their hands on guns and we know that it only takes one missing record to shatter a community,” he continued.

To his point, there are still 12 states that report fewer than 100 mental health records to NICS: *Alaska, *Hawaii, *Louisiana, Massachusetts, Montana, New Hampshire, *North Dakota, *Oklahoma, Rhode Island, *South Dakota, Vermont, Wyoming in 2013. However, some of these states (those with *) have recently enacted laws to increase reporting in 2014.

On the whole ‘Fix NICS,’ as the NSSF likes to call it, has been an seemingly bipartisan effort. Though, there is disagreement between Everytown and the NSSF on which organization is chiefly responsible for improving the system. 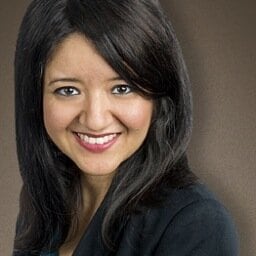 “After Mayors Against Illegal Guns began our advocacy work on this front in 2011, we were glad to have NSSF join us last year in the push to make sure that people suffering from serious mental illness — who are federally prohibited from owning firearms — are blocked from buying guns,” said Erika Soto Lamb, the communications director for Everytown.

“We have made significant progress in this campaign and it’s proof that this is not a partisan issue — laws have been passed by Democratic and Republican legislatures and signed by governors of both parties all over the country,” she continued.

While the NSSF officially launched ‘Fix NICS’ in the wake of the mass shooting at Sandy Hook Elementary in Newtown, Connecticut, in December of 2012, the firearms industry trade organization has been a longtime proponent of keeping guns out of the hands of prohibited persons. In fact, they were instrumental in creating the NICS back in the 90s.

From the NSSF perspective, they’re the one’s who’ve been leading on this issue as well as the ones who’ve been getting legislatures from across the country to address missing mental health records.

“We put our money where our mouth is,” said Lawrence G. Keane, the senior vice president, assistant secretary and general counsel to the NSSF, in an interview with Guns.com.

“We paid for lobbyists, we helped draft the legislation, we testified before the legislatures,” he noted. “No one from MAIG was there to be found.”

Whether it is MAIG or NSSF leading the way, it’s good to see that the records of those adjudicated mentally defective and those who’ve been involuntarily committed are increasingly being reported to NICS — wouldn’t you agree?

UPDATE: Erika Soto Lamb from Everytown wanted to add the following upon reading the comments from the NSSF:

“We’re grateful that NSSF is also working on improving state mental health records-reporting. Most recently we paid for lobbyists and asked our moms, survivors and other grassroots supporters to call on their legislators to pass the Fix NICS bill in Arizona — as we have done in a number of other states. In addition, we helped get Congress to appropriate $58.5 million to go to NICS in last year’s Appropriations bill, a $40 million increase in funding.”