Restaurant with ‘No Weapons’ sign robbed at gunpoint (VIDEO)

A North Carolina restaurant that had a “No Weapons” placard posted in its window was robbed by a group of armed men Sunday.

Three men wielding handguns and donning hooded sweatshirts entered through the back door of The Pit BBQ in Raleigh around 9 p.m. They ordered staff to the ground, assaulting two of them in the process, ABC affiliate reports. 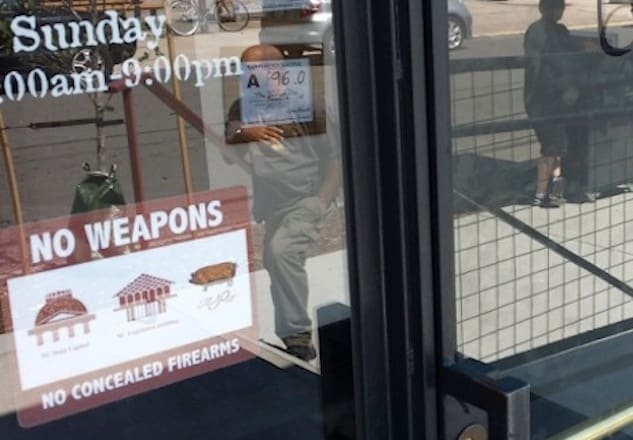 The “No Weapons” sign was posted in the front of the store, but the armed robbers entered through the back. (Photo credit: NC Gun Blog)

While the trio robbed the restaurant, the remaining employees in the dining area escorted patrons to safety through the front door, and past the “No Weapons, No Concealed Firearms” sign.

Though the bandits injured two employees before making off with an undisclosed amount of money, The Pit owner Greg Hatem said those employees are “doing great.”

“One of them actually went to the hospital and was released. They took a good look at him, he’s fine.”

According to News Observer, detectives are working to determine if the robbery was an inside job, or if the establishment was specifically targeted because of the “No Guns” sign.

Hatem wouldn’t say exactly how much cash was taken, but said, “I can tell you the amount wasn’t worth seven years in prison.” 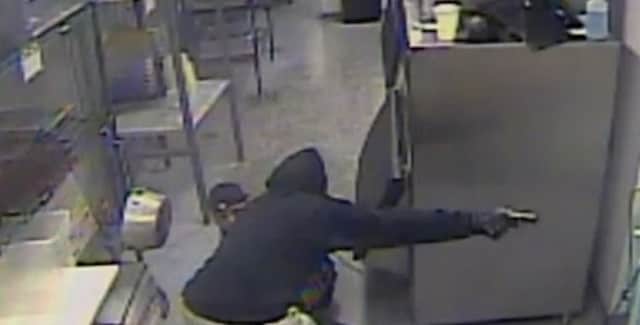 The bandits assaulted two of the employees during the robbery, sending one of the hospital. (Photo credit: screen grab from ABC 11)

Hatem is serious about bringing the criminals to justice and is offering a cash reward for anyone who can help lead to their capture.

“We’re offering $2,000 for the arrest and conviction of these guys,” Hatem said. “We take this very seriously.”

“We want to make sure our guests and our staff are taken care of,” Hatem added.