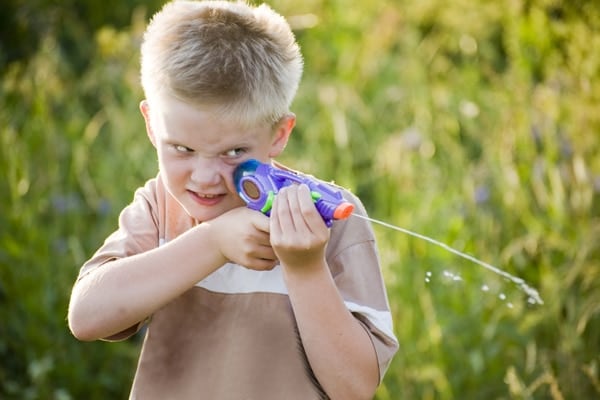 Residents of Lindsborg, Kansas are being advised to dust off their supersoakers for an upcoming city wide water gun fight scheduled for May 30. (Photo credit: City of Lindsborg)

While cities across the country are rushing to enforce harsh zero tolerance policies for youths with toy guns, one Kansas town is having an all-out water-gun war to mark the beginning of summer.

In Lindsborg, it will be a strictly bring your own water-gun requirement for participants in the city’s  “School’s Out Community Wide Water Fight” scheduled for May 30 at Swensson Park.

“We think this will be a great kick off to summer and a way to get everyone excited about Front Porch Friday which will be a regular event happening in Lindsborg the last Friday of every month,” read the press release from the city.

Local Lindsborgians as well as visitors are advised to dust off their supersoakers, but a strict “no water balloons” policy will be enforced. For ease of reloading during the expected soggy conflict, water stations will be prepositioned around the park. For the benefit of unarmed observers, dry zones will be set aside.

Besides the water war, there will also be a community potluck.

This festive event comes as many towns and schools are wrestling with the complex issue of just where to draw the line on youth and guns. Some have done the opposite of Lindsborg and instituted zero-tolerance policies on guns and gun-like items.

This has led to students being disciplined for gun key-chains, a kindergartener in Massachusetts being punished for bringing a Lego-gun on a bus, a teen being suspended for a shirt with an image of an AK-47 on it, and — this week — a Colorado youngster landing in hot water for drawing an ambiguously handgun-like cloud.

The wave of what is arguably over-the-top punishment has led to lawmakers taking action to ease mandatory disciplinary rules for schoolchildren doing such innocuous things as chewing a toaster pastry into the perceived shape of a gun.

Meanwhile, organizers for the upcoming event in Lindsborg promises, “it will be a real hoot for everyone, young and old, Lindsborgian or out-of-towner, all are welcome!”