'I don't give a s--- that you feel sorry for me,' bereaved father of Isla Vista victim (VIDEO)

Richard Martinez stormed onto the scene Saturday when he blamed “craven, irresponsible politicians and the NRA” for the death of his son, Christopher Michaels-Martinez, who was among the victims killed during a rampage Friday night in Isla Vista, California.

Martinez’s impassioned speech Saturday during a Santa Barbara County Sheriff’s Office press conference was only the beginning of his advocacy, as now the U.S. Army veteran and criminal defense attorney is making the rounds to spread his core message: “Not One More,” one that has been fully embraced by Everytown for Gun Safety, Michael Bloomberg’s pro-gun control organization.

“Today, I’m going to ask every person I can find to send a postcard to every politician they can think of with three words on it: ‘Not one more,’ ” 60-year-old Martinez said on Tuesday, in an interview with the Washington Post. “People are looking for something to do. I’m asking people to stand up for something. Enough is enough.”

Specifically, Martinez believes that the nation’s gun lobby has worked to engender a feeling of resignation when it comes to mass killers, as if it’s a problem that cannot be solved on the legislative front. 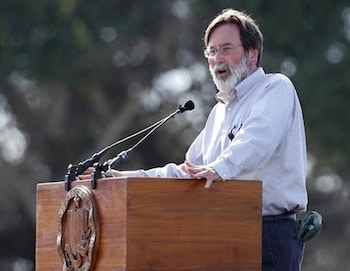 “I’m angry with the leadership of the NRA who always want to characterize this as if it’s a lone madman. That it’s an act of nature we have to tolerate,” he said. “I am angered by how they have worked to normalize this.”

“I understand this is a complicated problem. I have friends who are in the NRA. I grew up on a farm. I hunted. I killed animals. I understand guns,” Martinez continued. “But assault rifles and semiautomatic weapons? There is no need for those except in war.”

Elliot Rodger, the 22-year-old college student who killed Martinez’s son, used handguns (a Glock and two SIG Sauers), knives and his BMW to murder six and wound 13 others. Police found no evidence that Rodger used a so-called “assault rifle.”

While Martinez is supporting tougher restrictions on firearms and an end to senseless violence, it’s not exactly clear what he wants lawmakers to do on the subject of mental health.

In talking about law enforcement and their capacity to investigate those who are not prohibited persons, i.e. they have not been involuntarily committed or adjudicated mentally defective, but are nonetheless struggling with mental illness like Rodger evidently was, Martinez said “They don’t have the tools they need. I don’t have the answers, but we should ask them what they need and we should give it to them. It’s a lack of will to find solutions. That’s what I’m upset about. This is a problem that can be solved.”

In the meantime, that is until they get something done, Martinez does not want any sympathy from members of Congress or even President Obama.

“I don’t care about your sympathy. I don’t give a shit that you feel sorry for me,” said Martinez, in response to the condolences he’s received from lawmakers in the wake of the shooting. “Get to work and do something. I’ll tell the president the same thing if he calls me. Getting a call from a politician doesn’t impress me.”