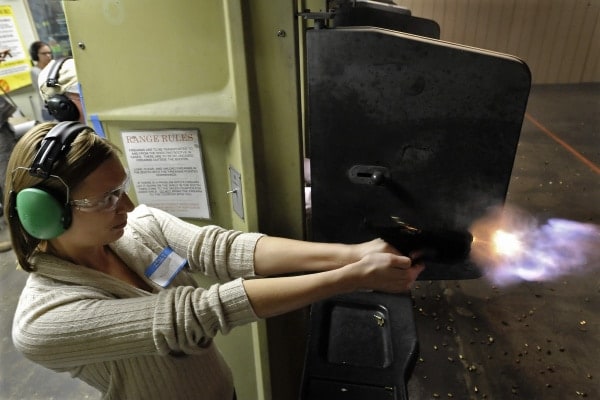 The number of concealed carry permits in Kentucky have more than quadrupled in the past decade. (Photo credit: Octavian Cantilli/Dispatch.com)

Since 2004, concealed carry permit numbers in Kentucky have risen 447 percent as the state has eased restrictions on the application process while expanding gun rights.

The latest report from the state police show that in 2013 there were 59,530 permits issued which is a more than four-fold increase from the number issued a decade ago.

Who is getting these permits?

“Everyone from doctors, people with PhDs, a lot of women,” says state concealed carry instructor Dale Hanlon. “We’re getting probably 60 – 70 percent of our classes are women. We have a lot of people that’s first time handgun owners.”

Besides an expanding demographic, there have been several incremental changes to the Bluegrass State’s carry laws in the past decade. These include easing training requirements for military personnel to obtain a permit, speeding up application process rates from 90 to 15 days if the forms are submitted electronically, and trimming residency requirements.

In 2013, gun rights in Kentucky were greatly expanded for permit holders when legislation opened up county and municipal buildings including parks and libraries to concealed carry while preempting prohibitive local ordinances.

Currently the cost of a permit in the state is $60 and, following a background check and successful completion of an approved firearms safety or training course, is good for five years. Kentucky also offers special concealed carry permits for active and retired law enforcement as well as judicial members, with enhanced rights.

Kentucky is not alone in seeing the numbers of concealed carry permits rise dramatically in recent years.

In Minnesota, the number of permits have tripled since 2009. Two states, Kansas and New Mexico recently saw their numbers of CCW applicants double. Colorado, facing strict new gun laws, processed twice as many applications in just the first six months of last year when compared to all of 2012.

Permit rates in Kentucky could continue to increase, as those with special interests in concealed carry are becoming more vocal about their rights.

This year, a bill to allow temporary concealed carry for domestic violence victims passed unanimously in the Kentucky Senate and is now under consideration in the House.

Meanwhile, a number of students at the University of Kentucky have been pushing for concealed carry rights to be extended to campuses in the state.

“What is the response time for the police? Three minutes? It takes three seconds to get stabbed,” said Chisum Kirby, 20, a member of UK Campus Carry, suggesting that students are sitting ducks if a deranged lunatic were to attack the campus.