The phrase “Plata o plomo,” which translates to “silver or lead,” was written in large lettering on a billboard in East El Paso. Another message on a billboard in Central El Paso read “dying for drugs.” Both billboards had mannequins dressed in suits and ties hanging from a noose, El Paso Times reports. 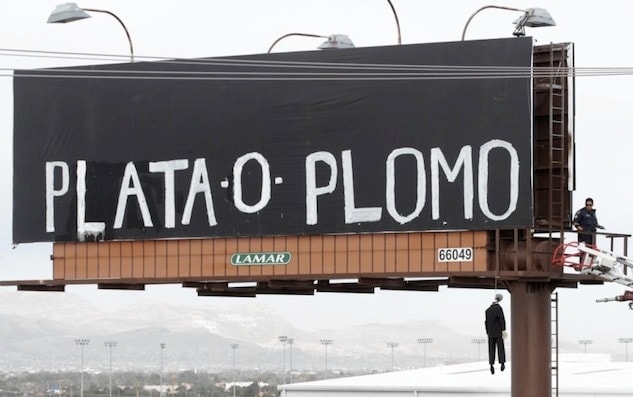 “Plato o Plomo,” or “silver or lead,” was painted on an El Paso billboard.

“This symbol has historically been used by Mexican drug cartels to threaten or intimidate Mexican citizens, business owners and government officials,” said Sgt. Chris Mears, a spokesman for the El Paso Police Department. “However, we have never experienced this in El Paso.”

Former director of the El Paso Intelligence Center Phil Jordan said there is no evidence to suggest the messages were intended for any one person in particular, but theorizes they may have been targeted towards someone who wasn’t cooperating with the cartels.

“Whoever did this went through a lot of work to get this accomplished,” Jordan said. “This is possibly a message to someone who hasn’t cooperated with the cartels. But, even if it’s a hoax, something like this is going to make the El Paso population uneasy, given that the city is not far from the killing fields of Mexico.”

The messages and mannequins have since been removed, but according to Mears, the investigation is still on-going.