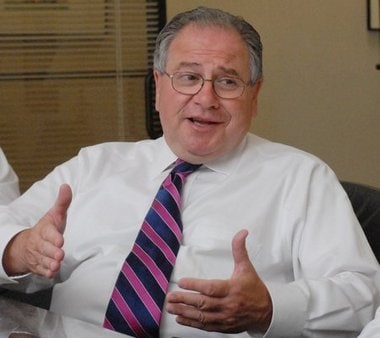 House Speaker Bob DeLeo is hopeful that his comprehensive gun-control agenda clears the Legislature by July 31, the end of the session. (Photo credit: MassLive)

Though Massachusetts already has some of the toughest gun laws in the country, several state lawmakers are aiming to ratchet up restrictions on gun ownership in the hope of curbing violence.

On Tuesday, House Speaker Robert A. DeLeo announced a proposal tantamount to an overhaul of the state’s gun laws, including expanding the state’s ‘may-issue’ concealed carry policy to cover not only the carry of handguns, but the ownership of handguns, rifles and shotguns.

DeLeo’s proposal would change this so that obtaining a Firearms Identification Card would not only include a background check but also require law enforcement to evaluate one’s “suitability” to own a firearm.

In short, one’s Second Amendment right would be subject to the discretion of law enforcement.

Other proposed measures include making the state join the FBI’s National Instant Criminal Background Check System (NICS), appropriating resources for schools to better monitor students at risk of suicide, universal background checks for all private transfers, among others.

“I knew we had to do something,” said DeLeo, at the press conference. “Our goal here in Massachusetts is to make serious and long-standing change.”

While the comprehensive proposal was in response to the mass shooting at Sandy Hook Elementary School in Newtown, Connecticut, DeLeo referenced other tragedies like last Friday’s spree killing in Isla Vista, California, where six people were murdered and 13 others wounded.

DeLeo also took a shot at Congress for not acting following Newtown, saying “In the face of continued absence of federal leadership, leaders in state government have to step up wherever we can.”

Meanwhile, Jim Wallace the executive director of the Gun Owners’ Action League told the Associated Press that while there are some positive points to the proposal with respect to addressing mental health in schools, “There are a lot of nonstarters in there for us,” particularly the ‘may-issue’ gun ownership provision.

“We were hoping for something we could support right off the bat, but it’s pretty clear we can’t,” Wallace told the Boston Globe.

“It’s a problem that doesn’t exist that they’re trying to solve,” Wallace explained.

However, supporters of the universal background check provision which would require all gun transfers and sales to be facilitated via a Federal Firearms Licensee or gun shop dealer argue that the provision would better aid police when they attempt to trace the chain of possession from owner to owner.

Thus far DeLeo’s proposal has been backed by several gun-control organization, including the Coalition to Stop Gun Violence and the Massachusetts-based Stop Handgun Violence.

“The new legislation unveiled by Massachusetts House leaders contains many critical reforms that will save lives; including universal background checks, increased penalties for failing to report lost/stolen firearms, and a requirement that the state submit disqualifying records (including mental health records) to the FBI’s NICS database,” said Ladd Everitt, the communications director for CSGV in an email to Guns.com.

Massachusetts currently has the nation’s second-lowest rate of gun-related deaths, including homicides and accidents, but that figure has actually risen since the enactment of the last wave of gun-control laws in 1998.

According to renowned criminologist James Alan Fox from Northeaster University, in 1998 the Bay State notched 65 gun-related homicides. In 2011, the number had increased to 122. Meanwhile, nationwide, gun-related homicides only increased 3 percent from 1999 to 2012, as Boston Globe reported, citing data from the Centers for Disease Control and Prevention.

While the state’s stats and nationwide trends on crime might leave one dubious about the efficacy of gun-control as a means to curb violence, the Executive Office of Public Safety believes that DeLeo’s bill is “an important step forward in the advancement of public safety in the Commonwealth. We are, at present, carefully reviewing and analyzing the measure to determine its full effectiveness,” according to a statement.

DeLeo hopes that the final version of the bill will clear both chambers by July 31, the end of the legislative session.