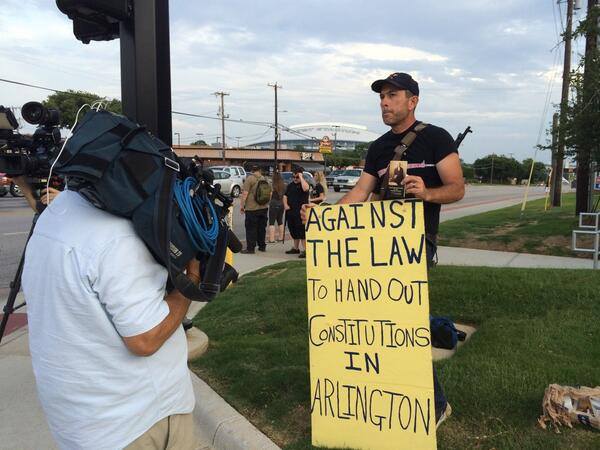 An Open Carry Tarrant County supporter shown protesting the pending ordinance in Arlington, Texas that would stop the group from passing out literature at busy city intersections. (Photo credit: Facebook)

Texas-based Open Carry Tarrant County filed a lawsuit in federal court Wednesday over Arlington’s new ordinance that would ban the group handing out literature and other materials, including copies of the U.S. Constitution, at city intersections.

The lawsuit is to prevent enforcement of a new city ordinance against pedestrians handing out material along designated busy roadways to motorists that are not in parked cars.

The gun rights group contends that it would prevent their long-held practice of distributing literature while demonstrating and open carrying near popular intersections, and claims that it would violate their first amendment right to free speech and assembly.

At these rallies the group passes out pamphlets, cards and pocket-sized copies of the U.S. Constitution.

“Open Carry Tarrant County conducts multiple walks a week throughout Tarrant County, particularly on weekends when they can interact with large numbers of people and exercise their First Amendment right to share the United States Constitution,” states the suit filed in U.S. District Court on May 28.

“However, they have been told and reasonably fear citation and arrest because they have been told that they will be cited and arrested for these activities by police and city council members,” continues the petition. “This has caused a chilling effect on members of Open Carry’s willingness to participate as they had in the past, as no one wants to be harassed and threatened with time in jail for doing nothing more than handing out the United States Constitution to those who have stated that they wish to receive it.”

Open Carry Tarrant County recently made news with their controversial meeting at a local Jack in the Box, which resulted in a campaign from gun control groups to clarify that corporation’s policy on armed patrons. This incident led to the group’s separation from the larger Open Carry Texas organization, which last week distributed guidelines to limit the open carry of long arms in private businesses during demonstrations.

Meanwhile, Arlington city officials maintain that the ordinance amendment is simply to protect pedestrians from being struck by motorists, and is not directed at the gun rights group.

“The ordinance doesn’t have anything to do with guns,” said Assistant City Attorney Robert Fugate. “There are many other places in the city where they can go about their business, distributing copies of the Constitution or distributing bananas. The content of their speech is irrelevant to the ordinance.”