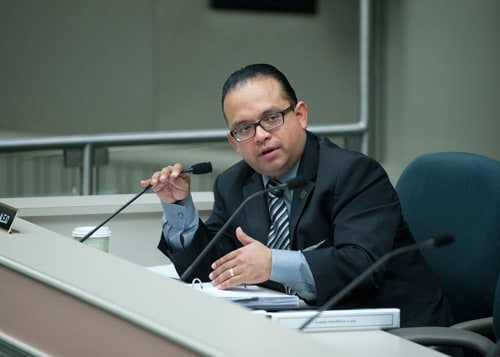 A measure that will place restrictions on firearms coming into the state and, according to gun-rights groups, will criminalize common firearm transactions, passed the California state Assembly Wednesday.

The legislation would make changes that go beyond existing federal laws to the state’s gun statutes involving firearm transfers on guns received from outside of California. It passed the Assembly by a 49-25 vote on May 28.

“Every day guns are being purchased across state lines in Nevada and Arizona, trafficked into California, and sold to criminals on our streets,” said Assembly member Luis A. Alejo (D-Salinas), the bill’s sponsor, in a statement.

Alejo continued, saying, “I am confident that this bill will cut down the number of guns on the streets of our most vulnerable cities by giving state law enforcement the tools to enforce what in many cases is now federal law.”

Alejo’s bill, AB 1609, the “Enforcement of Interstate Gun Trafficking Act,” is a six-page clarification to several of the state’s existing laws in regards to firearms transfers. Beginning in 2015, it would require all guns coming into the state to first be transferred to a Federal Firearms License holder who would perform required background checks and observe state-mandated waiting periods before the gun could then be transferred.

The bill is opposed by the Firearms Policy Coalition (FPC) who refer to the bill as “unnecessary, confusing, duplicative and will subject otherwise law abiding persons to criminal liability,” as well as both the California Rifle and Pistol Association and the National Rifle Association (NRA).

“AB 1609 is a counter-productive bill that will criminalize common firearm transactions that are now authorized under federal law,” reads a statement from the NRA’s Institute for Legislative Action. “Rather than targeting violent criminals, this bill is overbroad and unnecessary [sic] will result in inadvertent violations by otherwise law-abiding citizens.”

The NRA contends that the bill would deprive individuals who have dual-state residency from bringing their legally owned guns into California as well as place boundaries to intra-familial firearms transfers such as between a father and son, as well as firearms repairs coming back to a gun owner from a manufacturer.

Meanwhile, Alejo is referencing the bill in relation to the recent slayings in Isla Vista, painting it as part of the solution to gun violence.

“We don’t have to wait for another massacre,” Alejo said Wednesday. “We can take action to pass sensible gun policies that protect our communities.”

Assembly Bill 1609 is now in the state Senate waiting for assignment to committee.