Check out these new American, Gadsden Flag lowers from Stag 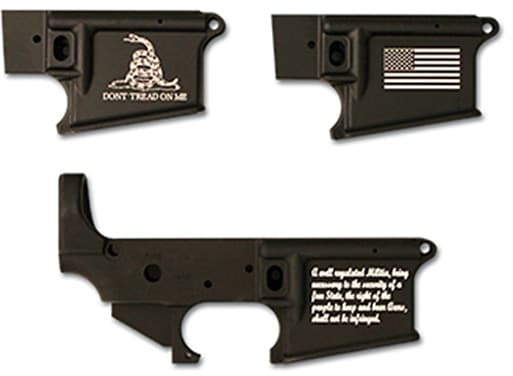 Stag Arms is now offering laser-engraved rifles and lowers with optional American or Gadsden Flags etched into the magwell. This is an extension of the company’s Commemorative Rifle Program which gives Stag customers the option of having their rifles laser-engraved.

One of the cool things about the flag engravings is that they’re extremely affordable. For just $15 extra you can have any Stag rifle or lower laser-engraved with your choice of the American or Gadsden Flag.

A third option is to have your lower or rifle laser-engraved with the text of the Second Amendment, which has been available for some time now. Stag takes gun rights very seriously.

“Everyone at our factory is proud of the USA and we are very vocal about our Second Amendment rights,” said Stag sales manager David DeFord. “We wanted our customers to be able to show the same patriotism.”

Stag Arms opts for laser engraving as it bores deeper into the metal of the receiver. It penetrates the anodizing and cuts into the raw aluminum underneath for a permanent etching that won’t wear off like painted coating or an imprint.

Stag has already updated its product page with these new options, so they are available right now.

Of course, for a price, Stag will engrave lowers with any design of your choosing.

Through the Commemorative Rifle Program Stag customers can have their receivers custom laser-engraved with their choice of submitted designs, logos, quotes or insignias. Like with the flags and the text of the Second Amendment, the engraving goes on the right side of the magwell and will be sized to fit it appropriately.

Stag prices custom engraving out per order and offers discounted engraving with larger orders of 10 or more rifles. Due to demand Stag has stated that orders can take up to two weeks to fill.

All of the details about the Commemorative Rifle Program are available through the Stag Arms Website.

That being said they don’t want to leave their supporters high and dry and have developed a Connecticut-legal AR for their followers at home.

More recently Stag introduced a series of left-handed rifles and uppers in 300 AAC Blackout, a first for the commercial AR market. Stag Arms is a leader in left-handed AR-patter rifles in general and should be at the top of the list for southpaws everywhere.