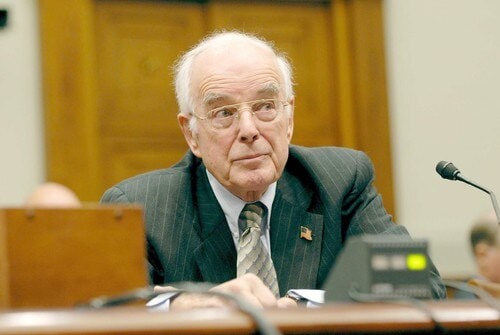 U.S. District Court Judge Manuel Real dismissed the ATF’s case against three men whom he contends were enticed to commit a fictitious crime by the agency. (Photo credit: CSPAN)

A federal judge in California dismissed a case resulting from a Bureau of Alcohol, Tobacco, Firearms and Explosives’ investigation this month stating that the government “created the fictitious crime from whole cloth.”

However, the house in question was the site of an ATF sting and the alleged robbers’ contact and getaway car liaison was an undercover ATF agent.

All three plead guilty after their arrest in September and were awaiting sentencing from Real, who instead, dismissed the case.

According to court transcripts, the three defendants had been recruited by confidential informants, who were given $8,600 to “convince citizens to join the government’s scheme,” in Judge Reals’ words.

He further pointed out that none of the three men had a history of being involved in matters concerning guns, tax violations, or liquor that would have brought them under the ATF’s scrutiny. This was described by the federal judge in court as,” trolling poor neighborhoods to ensure and ensnare its poor citizens.”

Judge Real dismissed the U.S Attorney’s case against the three men, “for the government’s outrageous conduct,” and ordered their release in the May 12 hearing. He found that, in his opinion, there had been no crime to charge them with in the first place.

The U.S. Attorney’s office filed an emergency protective notice of appeal with the U.S. Ninth Circuit of Appeals in the case, stating that the three individuals were flight risks. The 9th Circuit approved that notice and all three remain in custody while the appeal is considered and is expected this fall.

This case is the latest example in a growing list of embarrassing investigations by the agency that seem to defy common sense and endanger public safety.

In January the U.S. House Committee on Oversight and Government Reform and the House Judiciary Committee announced that they planned to look into ATF storefront sting operations in Milwaukee and in other places around the country (Portland, Oregon; Wichita, Kansas; Albuquerque, New Mexico; Atlanta, Georgia; and Pensacola, Florida) that employed questionable practices.

This scrutiny was compounded in March when California Rep. Darrell Issa slammed the ATF’s outright refusal to cooperate with the investigation, similar to the agency’s response to the Congressional probe into Operation Fast and Furious.

That fatally-flawed gunrunning program is blamed for sending upwards of 2,000 firearms south of the border, many of which landed in the hands of known cartel operatives. At least one of those firearms linked to Fast and Furious was found at the murder scene of U.S. Border Patrol Agent Brian Terry.

Meanwhile, Judge Real, nominated to his court in 1966 by President Lyndon B. Johnson, has promised to “write an opinion having to deal with all the factors which were used by the government to convince these defendants to participate in a false stash house robbery.”

And when he does, Guns.com will bring it to you.