Kahr breaks ground in Pennsylvania, marching out of New York 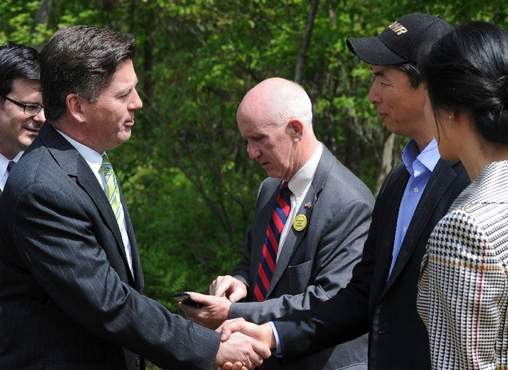 Kahr Arms is pushing forward with its decision to move from Rockland County, New York, to Pike County, Pennsylvania. The company said that the relocation is a direct result of the recently-passed SAFE Act gun control package in New York.

“We are very happy to be in Pike County, in a place where people love the Second Amendment and love guns. It is a great place to be,” said Kahr’s founder Justin Moon to the Pocono Record. “I just wish the rest of the country could be like Pike County.”

“This is a good news story for Pike County and the Pocono region,” said Lt. Gov. Jim Cawley, who was in attendance, “And it is a great news story for the entire state of Pennsylvania.”

Kahr purchased a 600 acre business park unincorporated Pike County for $2 million. Kahr is paying to have water and power infrastructure installed in exchange for a fixed tax rate based on the property’s original, not improved value, for the next five years.

The first thing Kahr has broken ground on is its corporate headquarters. From there the company will oversee the addition of manufacturing and other facilities, relocating its production facilities as infrastructure allows.  Kahr is literally building things from the ground up at the new home.

Kahr plans to relocate its entire business to Pennsylvania in the coming years and fill the park with other gun-related industries. The process is expected to take the full five years.

Once the company is up and running its looking to add between 100 and 200 jobs to the region, some temporary, some permanent, not to mention, provide a lot of work for local businesses as it builds its facilities.

It won’t be too long before Kahr’s slender, lightweight, single-stack concealed-carry pistols will say “Made in Pennsylvania” on the side.

In addition to its own brand, Kahr Arms own Auto-Ordnance and Magnum Research. Auto-Ordnance makes real and replica reproductions of World War II firearms including 1911s, Thompson and M1 carbines. Magnum Research of course makes the Desert Eagle big-bore pistol and several other series of firearms, including revolvers and target rifles.