Michael Bloomberg, billionaire media magnate and the fearless leader of Everytown for Gun Safety, appeared on NBC’s “Meet the Press” on Sunday to give his thoughts on the recent spree killing in Isla Vista, California.

While the former mayor of New York City didn’t claim to have all the answers, he did slam campus carry as a means to stop a deranged killer from taking innocent lives.

“We’ve had shootings on campus and at the same time, some states are passing laws to explicitly let people carry on campuses,” Bloomberg told host David Gregory. “I don’t know what you were like when you were in college, but my recollection of college 50 years ago is kids just should not have guns on campus.”

In referencing the tragedy that left seven people dead, including the perpetrator of the attack, 22-year-old Elliot Rodger, and 13 others wounded, Bloomberg said that the “real problem here is we have too many guns in the hands of criminals, people with psychiatric problems — as this guy obviously did — and minors. And we’ve got to find some ways to stop that.”

According to investigators, Rodger had a history of mental illness. However, because he was never adjudicated mentally defective or involuntarily committed, he was not prohibited from purchasing firearms legally, which he did via a federal firearms licensee months leading up to the rampage.

The question then becomes how does one prevent guns from falling into the hands of those who are a threat to themselves or others but not yet institutionalized or labeled a mental defective. For Bloomberg, it was a question of protecting one’s civil liberties while also giving law enforcement the authority to act in the public interest.

“Well, you always have to have due process, and you can’t just go incarcerate people,” Bloomberg explained. “Psychiatrists will tell you they can’t predict which people with mental illness will get a gun and start killing people, but you want to have laws that let you get a temporary restraining order.” 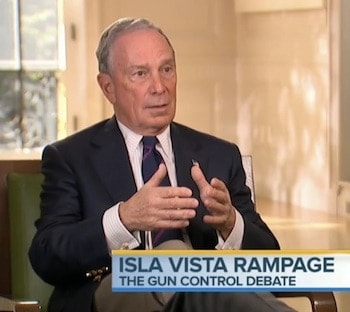 But in the case of Rodger, police confronted him the month prior to the attack after there were complaints that he may be suicidal. Yet, after talking with him for some time, Rodger convinced police that the complaints concerning his mental state were overblown, leaving many to question whether any law, restraining order, or police action would be enough to prevent a cunning and determined sociopath from carrying out an attack.

“It’s hard to do because if some people go to their private doctor and how do you find out about it?” noted Bloomberg. “Nobody says any law is going to solve all the problems. What we do know is a lot of people with mental illness do things that are destructive to themselves and to others.”

Aside from expanding the use of temporary restraining orders, Bloomberg said that he believes lives can be saved by ensuring that records of prohibited persons are submitted to the federal background check system, currently some states do a poor job of submitting records into the system, and requiring background checks for all gun transfers.

“It works,” Bloomberg said. “It’s not perfect, but it gets you there.”

Moving ahead, Bloomberg said that politicians should heed the call of Richard Martinez, the father of Christopher Martinez, who was fatally shot during the attack.

“I think every one of those in the federal government and legislature, the Senate and the House, should watch the video of this father the other day, saying “no more.”