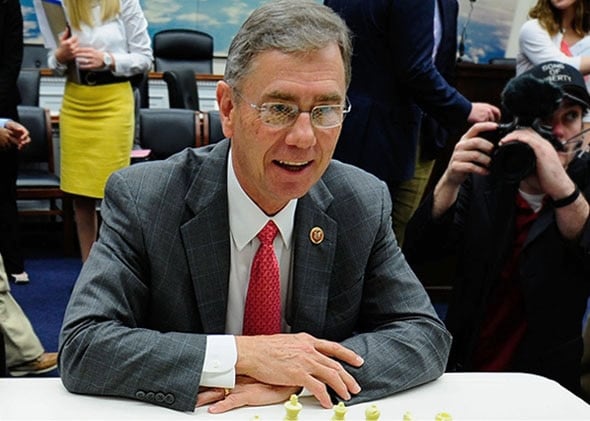 Following an extensive review of the Department of Justice’s Operation Choke Point, which had the effect of closing off banks from businesses considered “high risk,” including the gun industry, the U.S. House voted to defund the program Thursday.

The voice vote came late Thursday night as an amendment to HR4660, the funding bill for several federal agencies including the Justice Department and a $19.5 million increase in the FBI’s background check system. The author of the amendment was Missouri Rep. Blaine Luetkemeyer (R-MO-3).

“Number one, we support DOJ efforts to find fraud, abuse, and root that out,” Luetkemeyer to Breitbart News.

“But it appears the DOJ is not interested in simply going after the bad guys but the entire banking industry,” he continued. “So we want a safe harbor to be given to banks that meet certain criteria, so they can feel free to conduct business — including business with the firearms/ammunition manufacturer and sales industry.”

The congressman said that he felt, “”Operation Choke Point goes beyond looking for fraudulence and seeks instead to do away with an entire industry.”

This came the same day that a scathing 12-page report was handed down by the House Committee on Oversight and Government Reform concerning Choke Point.

According to the report, “Operation Choke Point has forced banks to terminate relationships with a wide variety of entirely lawful and legitimate merchants.” Put in simple terms, the report states, “Banks are put in an unenviable position: discontinue longstanding, profitable relationships with fully licensed and legal businesses, or face a potentially ruinous lawsuit by the Department of Justice.”

Further, the findings contend that the Justice Department lacked adequate authority to conduct the operation and, although it was aware of the impacts it was having on legitimate commerce, dismissed them.

“Such an expectation — ‘if they are legitimate, they can prove it’ — is patently absurd, and reminiscent of the formulation that ‘if one is not a witch, then they will sink rather than float,” the report states.

The committee recommended that the Justice Department close the books on Choke Point.

“In light of the Department’s obligation to act within the bounds of the law, and its avowed commitment not to ‘discourage or inhibit’ the lawful conduct of honest merchants, it is necessary to disavow and dismantle Operation Choke Point.”

This brought rapid comment and praise from gun rights groups and those in the firearms industry.

“The report concludes that the true goal of the operation is to ‘choke out’ certain industries, including legal businesses like sellers of firearms and ammunition, which the current administration considers politically objectionable,” according to a  news release from the National Rifle Association’s Institute for Legislative Action Friday

Those in the firearms industry, who have heard from several members that banking relationships had been terminated by lending institutions, took public exception to the DOJ’s, now Congressionally disavowed operation.

“We respect the right of financial institutions to make business decisions based on objective criteria,” the National Shooting Sports Foundation said in a statement Thursday. “It is unacceptable, however, to discriminate against businesses simply because they are engaged in the lawful commerce of firearms, an activity protected by the Second Amendment.”

The Justice Department’s Office of Public Affairs has not responded to comment requests from Guns.com concerning Operation Choke Point.