Louisiana bill to allow hunting with suppressors signed into law 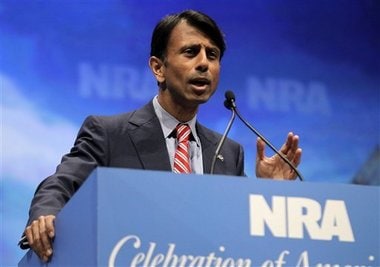 Gov. Bobby Jindal, shown speaking at the National Rifle Association convention, has just signed into law a pro-gun bill authorizing the use of suppressors for hunting. (Photo credit: Michael Conroy/AP)

Hunters in the Sportsman’s Paradise will be able to use legally-owned suppressors to both harvest game and control pests following Louisiana Gov. Bobby Jindal’s signing of House Bill 186 into law Friday.

HB186 strikes the state’s ban on using National Firearms Act-registered suppressors, commonly but incorrectly referred to as “silencers,” in hunting, and replaces it with language to allow widespread use by lawful sportsmen.

The popular bill had sailed through the state Legislature, passing the Senate unanimously on May 20 with little comment by lawmakers.

“This is about mitigating the noise and preventing hearing loss,” said Rep. Cameron Henry (R-Metairie), sponsor of the legislation.

The law will allow any person who possesses an NFA-complaint and properly registered firearm suppressor to use the device to both harvest game animals as well as pests and nuisance wildlife such as beaver and nutria. However, in an apparent bid to void use by those with a history of poaching, it forbids the use of suppressed firearms by those who have been convicted of certain wildlife violations in the past five years. 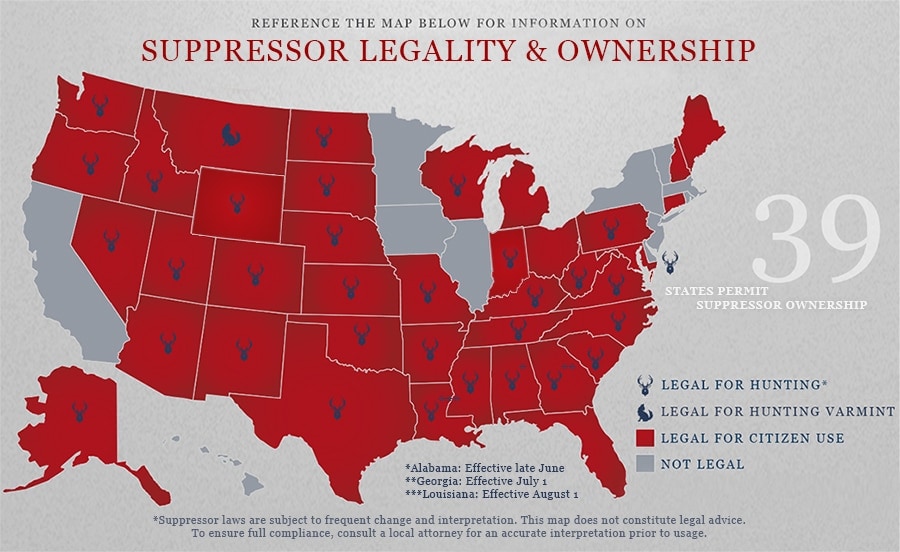 With Louisiana’s adoption of HB186 as law, suppressors will be legal to use in hunting in 33 states. (Photo credit: ASA)

Only a handful of Louisiana House representatives voted against the suppressor bill when it passed through that chamber in an 82-15 vote in April. Those who did oppose it voiced concerns about the use of suppressors by criminals as well as the broad allowances to use the devices for virtually all game in the state.

Both the National Rifle Association and the American Suppressor Association supported the legislation, stating that the devices help prevent hearing loss, mitigate noise complaints and can increase accuracy for both experienced and novice hunters.

“The new law marks a major step in the right direction for hunters across the country who wish to protect their hearing,” said Knox Williams, president of the ASA in a statement. “By August 1, of the 33 states in which suppressor hunting will be legal, Montana will be the only state which restricts their use to non-game animals.”

In the past several months, there has been an identifiable movement towards increased acceptance of suppressor use in hunting. Ohio has similar changes to their hunting laws in the works, while taking game with suppressors just recently passed into law in Georgia as part of that state’s comprehensive gun reform legislation. Meanwhile Alabama, through that state’s Department of Conservation, voted unanimously in May to make the Heart of Dixie the 32nd in the Union to allow hunting with legal suppressors.

The new Louisiana law is effective Aug. 1, 2014, just in time for this fall’s hunting seasons.