Police fatally shot an 8-year-old Rottweiler while responding to a possible burglary Friday morning in Round Rock, Texas.

As two Round Rock police officers were clearing a home in the 1700 block of Parkside Circle they encountered Bullet, a 120-pound, 8-year-old Rottweiler. The dog acted aggressively and the officers fired a total of seven rounds, killing the animal. But the owners say Bullet wasn’t an aggressive dog at all, the ABC-affiliate reports.

One of the officers fired their weapon once, while the other officer fired six times. Bullet was struck a total of five times and was pronounced dead at the scene. 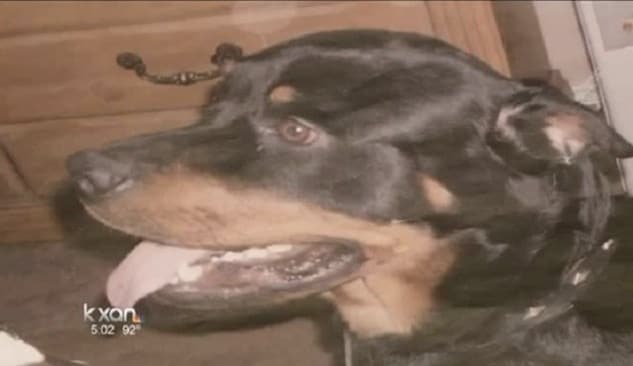 Bullet was shot a total of five times after police said the dog growled and lunged and them. Photo credit: ABC-affiliate)

Homeowner Hope Lane said her granddaughter didn’t shut the front door all the way as she left for school Friday morning, and when it was blown open by the wind their home alarm went off.

According to the NBC-affiliate, when police arrived on scene they found the front door wide open. They announced themselves before entering the residence and while moving from room to room they spotted Bullet.

Round Rock Police Commander Jim Stuart said Bullet was barking, growling and lunging at the officers, and even after being shot, the dog continued advancing towards them.

But according to Lane, Bullet had never acted aggressively before. Her dog had hip dysplasia, and she said it took him a long time to get anywhere.

“My dog is in his home, in his room, laying down chilling like he does,” Lane said. “And he takes a long time, anybody can come in the house and be like, ‘I thought you had a dog?’ and I do, but he’s not an aggressive dog.”

After police fatally shot Bullet, they cleaned the scene of blood and bullet casings, leaving behind only two bullet holes in the wall, and another through the futon Bullet slept on. 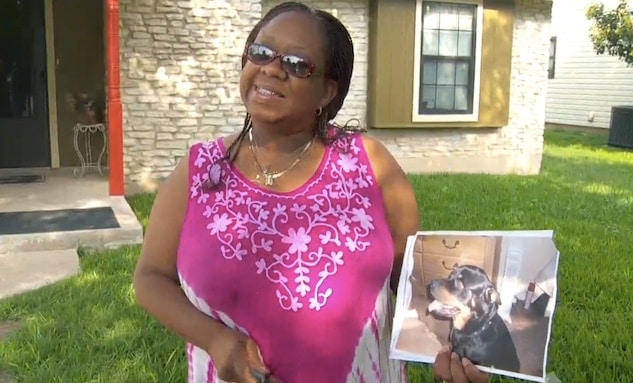 Hope Lane said she received Bullet as a gift when he was just 8-weeks old, and said he was more than just a friend. Photo credit: ABC-affiliate)

“They basically came in the house and murdered my dog,” said Russell Lane, Hope’s husband. “I need for those officers to have repercussion. They made for the decision to kill my best friend in his bedroom while he was laying down.”

Hope Lane said Bullet was gifted to her when he was only 8-weeks-old, and said she considered him to be more than just a friend.

“Unfortunately we lost our dog.” said Lane. “I want to say our son.”

Police officials said they will launch an internal investigation into the shooting.