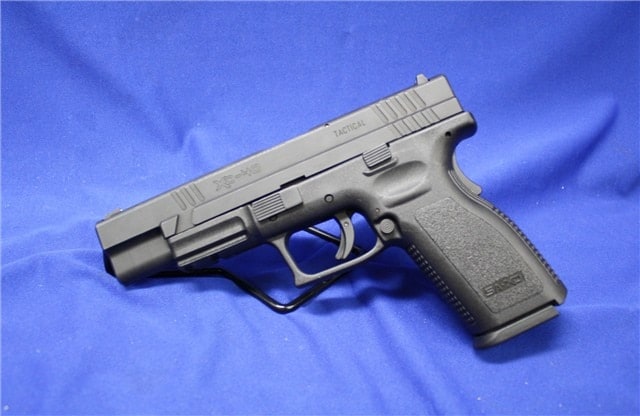 The XD is a good looking gun, but it doesn’t belong on the list. (Photo credit: handgunsforsaleguns.com)

Last week my article “Five full-size polymer pistols that should make Glock nervous” caught a ton of flack for not including the Springfield Armory XD series of pistols — for good reason, too. These guns are incredibly reliable, accurate and prolific. However the omission isn’t an oversight or mistake on my part, it is intentional: the XD doesn’t belong on that list.

The XD and XD(m) pistols are licensed copies of the Croatian HS2000 and have established themselves as equals to Gaston Glock’s magnum opus. So why wasn’t it included in my five guns to make Glock nervous list?

Multiple reasons. Foremost the article dealt with guns that should make Glock nervous, the XD(m) already does and has for a few years. The other handguns on the list are popular but pale in comparison to the Glock’s market proliferation.

Secondly, I never recommend or speak with authority on any subject I’m not intimately familiar with, if I can help it. (When talking about howitzers I would love to provide first-hand accounts of their performance, but thus far no companies will send me a Paladin). Despite having owned an XD, I never shot more than 200 rounds before trading it for an M1 Carbine. Without at least 500 rounds through a design I feel I can’t honestly recommend it to anyone since I would only have perfunctory experience with it.

Lastly, in my experience the XD series of pistols are uninspiring, much like Glock handguns. Both are flawlessly reliable, hold more than enough ammo for every situation and shoot accurate enough for combat use, and are good in all regards. But in their quest to be everything to everyone, achieve goodness in several areas but fall short of greatness in just as many. This makes sense if you understand who Springfield likely intended to sell the pistol to: police departments. While the civilian market is the real money maker, LEO contracts provide a steadier, more predictable stream of income that allows a company to fund improvements or new product-launches without fear of running out of dough.

So how do you make a gun more attractive to police departments who are often run by politicians than the end-all be-all, idiot-proof safe-action Austrian heater? You make it “more safe.” The XD series of pistols have better ergonomics and a better trigger than factory Glock handguns, but the only improvements that a police department would be interested in, unless it is run by a shooting enthusiast, is the grip safety.

Does that make the standard XD a bad gun? Absolutely not. It’s still a reliable, well thought out design at a good price point, but the original XD, while great, could have been game-changing. Imagine if the XD had the same grip and trigger mechanism as an M1911 with it’s interchangeable backstraps. Now imagine the slide dehorned so completely that it makes the Kimber Solo look like a straight-edge razor. The perfect combat pistol that could double as a concealed carry weapon. I digress,  I’m not excluding the XD for wasted potential, but for ineligibility.

The XD series of pistols didn’t make the cut simply because they already make Glock executives very nervous, or at least they should. Especially with the introduction of the XD(m) series, which put all factory Glocks to shame, in my opinion.