Editorial: Why we need a federal knife registry 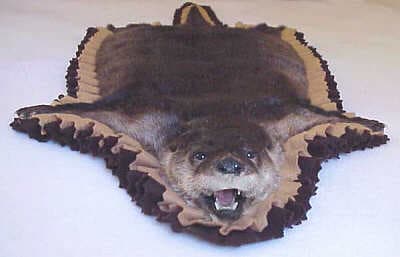 Although it hasn’t been confirmed, a knife was probably used in the making of this otter pelt. (Photo credit: Bill’s Bear Rugs &Taxidermy)

On the subject of public safety President Obama once said, “No law or set of laws can keep our children completely safe. But if there’s even one thing we can do, if there’s just one life we can save, we’ve got an obligation to try.”

It’s with this philosophy in mind that I’m encouraging lawmakers at the federal level to adopt legislation that would expand bans on certain knives, mandate universal background checks on all knife purchases and/or transfers and create a nationwide registry of knife owners.

Let’s be honest, knives are not just tools used to whittle sticks and chop logs and carve pumpkins and skin otter pelts and prepare vegetables for a sesame-chicken stir fry, they’re also weapons that can be used by killers to take the lives of innocents.

It’s a known scientific fact that knives are dangerous. Many are not only sharp, but also pointy. Meaning, one can not only get cut by a knife, but also stabbed with a knife. Again, this is not political conjecture, corporate propaganda or the ramblings of a town drunkard, but real empirical reality. Let’s face it folks, knives are deadly.

Due to the existential threat, the clear and present danger, the impending malice they forebode, we need to ramp up efforts to control the possession, transfer, sale and importation of all edged implements, including but not limited to kitchen cutlery, axes, tomahawks, hatchets, multi-tools, fixed blades, folders, swords, throwing knives, scalpels, razors, scissors and personal grooming equipment (toenail clippers).

According to FBI statistics, “knives or cutting instruments” were used to murder 1,694 of the total 12,664 homicide victims in 2011. To put that in better perspective, knives accounted for approximately 13 percent of homicides in the latest year to which government data was readily accessible.

It goes without saying but while the government is aggressively trying to place limits on one’s right to keep firearms for traditionally lawful purposes like self-defense within the home, the fed is not doing enough to restrict knife ownership.

Put quite simply, we need more federal laws on knife ownership, we need federal background checks on knife purchasers and we need a registry of knife owners.

By virtue of the faultless logic of California politicians, we must expand bans on certain knives with certain characteristics despite the fact that they may be popular, commonly owned and functionally identical to other knives. Remember, if it can save one life we have an obligation to try.

Currently, when one purchases a knife online, at a knife show (like Blade 2014 in Atlanta June 6-8), in a sporting good or department store, there is no federally mandated background check to ensure that the prospective purchaser in not a felon, a mental defective, a minor, a domestic abuser, an individual who’s been involuntarily committed, a drug abuser, a fugitive from justice, an illegal immigrant or someone who has been discharged from the Armed Forces under dishonorable conditions.

It is in the best interest of the public for all of the aforementioned to be prohibited from possessing knives. Though, right now, there is no way to stop them from going online or to a department store or to their kitchen drawer and picking one up. 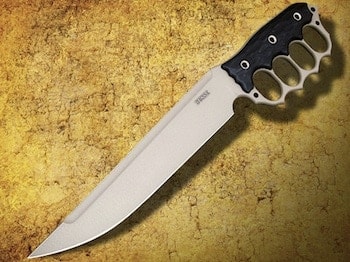 A universal background check system is a reasonable, common sense measure that would help ensure that knives stay out of the hands of these prohibited people because before one sells his hunting knife online to a fellow forum member or loans out his mora knife to a friend or passes the butter knife during supper to his grandmother that prospective transferee (the Internet user, the friend, the grandmother) would have to report to a federally-approved department store and undergo a background check. If the transferee failed the background check, then they would not be allowed to possess the knife.

Moreover, if that universal background check system was undergirded by a knife registry, which included the names, addresses, social security numbers, bank account info of all knife owners along with a description of each and every knife they own, then the government would really have the capacity to keep knives out of the wrong hands.

The knife registry would give the government the access it needs to keep everyone safe. Plus, it would make things a lot easier for government agencies to confiscate knives in the event that an individual becomes a prohibited person, an enemy of the state or just downright suspicious.

For those who argue that criminals and other prohibited persons are already inclined to disobey the law and that due to the number of knives currently in circulation (an unknowable but presumably very large number) it would be virtually impossible to prevent those individuals from obtaining knives — short of confiscating all the knives in the country and instituting a big-brother government surveillance program — regardless of how many new laws are passed, they need to realize once again that if it can save one life than we have an obligation to try.

One’s civil liberties, one’s right to self-defense and one’s Constitutional right to keep and bear arms (including knives) are not nearly as important as the government’s interest in keeping you safe — not only from heartless marauders, stone-cold killers, serial rapists and other evildoers, but from yourself. After all, knives are sharp and dangerous. And that one life that may be saved by sacrificing all these so-called “essential liberties” and “fundamental rights” may be your own.