An Iowa homeowner who was injured during an early morning burglary Sunday managed to shoot the armed suspect several times.

The Coalville homeowner woke up around 6 a.m. and heard knocking at the front door. When he went to answer it he was met by a suspect armed with a knife. The homeowner sustained several knife wounds to the neck, but still managed to shoot the suspect three times in his torso, KCCI reports.

After being shot three times, the suspect fled in a van. He crashed several miles later in a ditch down Old Mill Road. (Photo credit: Messenger News)

The suspect fled in a van, but only made it about five miles before crashing into a ditch, where police later found him and had him airlifted to a Des Moines hospital.

The homeowner was transported to Unity Point hospital in Fort Dodge.

Neighbor Lori McCarville, who only lives a few houses down from where the shooting took place, said she was woken up by the gunfire.

“I heard three pops and I looked at the clock and it was 6:22 and I was just shocked, you know, but it woke me up out of my sleep,” said Lori McCarville. “I was just still like, did this really happen? Because you don’t really expect this in this quiet, little neighborhood.”

Webster County Sheriff Jim Stubbs noted that while the sleepy town of Coalville may only have around 600 residents, anything is possible. 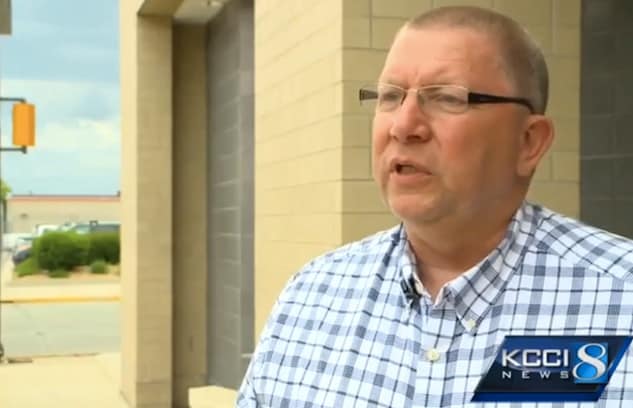 Webster County Sheriff Jim Stubbs said even though the small town of Coalville only has around 600 residents, you never know what can happen. (Photo credit: KCCI screengrab)

“It just goes to show you what can happen in even a rural setting, that things are not – nobody’s immune to these types of things,” said Stubbs.

According to Messenger News, Stubbs said the shooting was an “isolated incident” and that the residents of Webster County are safe.

“There is no immediate threat to the residents of Webster County,” Stubbs said. “We are confident that we have the right people located.”

Charges have yet to be filed, but Stubbs said his office will be forthcoming once they are.