A shotgun will save your life 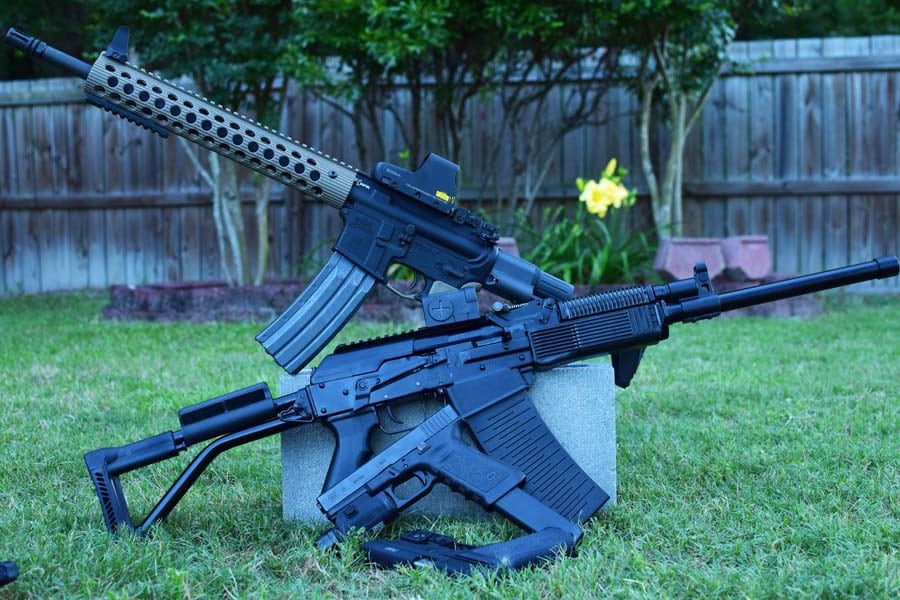 Pistol, rifle or shotgun? Some problems can only be solved with double ought buck. (Photo by Jim Grant)

Have you ever been in a gun store and heard a clerk tell a new gun owner that the best home defense gun is a pump-action 12 gauge? Simply rack the action and the noise alone will scare off most intruders. We all know one guy who parrots this advice like he’s “been there” or “seen stuff.”

If you are new to the world of defensive firearms or even if you’ve been around guns all of your life, let me give you a solid piece of advice: that statement is bullshit and any person who repeats its effectiveness has never personally witnessed it. The only kind of home intruder frightened by sudden loud noises come from the animal kingdom.

For the sake of argument, let’s say that a loud noise deters criminals 50 percent of the time — and I assure you the number is much closer to never. Relying on a one in two success rate of frightening off an attacker is negligent at best. Especially if you’re not prepared to use the shotgun for anything more than ‘making noise’.

The most powerful dissuading aspect of a shotgun isn’t the noise it makes or its reputation, it’s the amount of hot lead it hurls at a target. That said, the scattergun isn’t the one-hit wonder armchair generals and Hollywood make it out to be. Even with an National Firearms Act-regulated 12-inch barrel, a user must aim the shotgun carefully to hit the desired target. The cone of fire is much narrower than most people believe. If shotguns really spread out to the size of a beach ball at 10 feet and launched aggressors across the room, wouldn’t every military on Earth ditch their weapons for these portable howitzers?

Don’t get me wrong, the shotgun is an excellent defensive weapon, but just like pistols and carbines it has its limitations. Most shotguns have limited ammo capacity, tremendous recoil and cumbersome reloading techniques. Yet, the shotgun’s ability to stop fights faster than carbines or pistols has earned it a permanent reputation as the ultimate home defense weapon. I agree that shotguns are tremendously effective, in the appropriate scenario, when wielded by trained hands.

The substantial payload of home-defense double ought buckshot rounds that make it an effective manstopper, also make it difficult to control. While length of pull is important on a home defense carbine, it is crucial on a home defense shotgun. An ill-fitted shotgun coupled with these powerhouse loads will cause the shooter great pain and can lead to bad-habits, such as flinching. Even worse, the anticipation of this recoil and pain makes the weapon less conducive to training. This is essential with a tube-fed shotgun as the reloading procedure is more difficult and very different from almost all centerfire rifles and handguns.

Food for thought: if something is difficult to perform in ideal conditions, it will be impossible to execute under adverse ones. The only way to make something awkward and unfamiliar become second nature, is to train consistently. 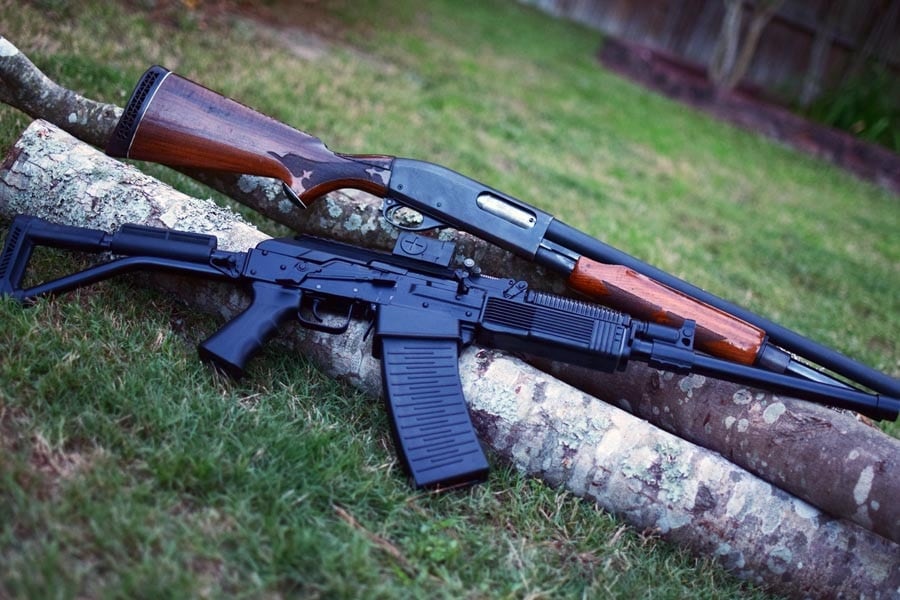 Magazine-fed shotguns are easier to reload, but tube-fed ones are more reliable. (Photo by Jim Grant)

Additionally, most people fail to grasp the ease with which an inexperienced shooter can jam a pump-action shotgun, especially when scared half to death. Oftentimes a veteran weapon with thousands of rounds through it makes a better fighting arm than a brand new gun. This ensures that new shooters, who might not break the weapon in properly, can concentrate on becoming proficient rather than getting the weapon to function properly.

Overpenetration with the shotgun ranges from insignificant to frightening. If a shooter chooses a solid zinc slug he can expect his round to stop only once it hits something harder than zinc. Home defenders who choose bird-shot will have little in the realm of overpenetration to worry about, but they will also discover that it is the least effective traditional shotgun round against humans.

Think I’m full of it? Dick Cheney shot 78-year-old Harry Whittington, center mass, at 20 yards with birdshot and the two were having drinks together just a few hours later. If it had been buckshot the man’s injurious would be grievous enough to incapacitate, if not fatally wound him. While I don’t have the statistics in hand, I can safely say that the majority of home invaders aren’t in their seventh decade of life. If your home defense round can’t reliably stop someone demonstrably less combat effective than a 40-year-old man, it’s time to reevaluate your decision.

Slugs are a great choice if you live somewhere remote, though they strip the shotgun of half of its more important features, its close-quarters advantage. With a 1-ounce slug, literally no human on earth can survive a direct hit to a vital organ or crucial bone structure. Again, this penetrating power comes as a price, both economic and ergonomic. Slugs aren’t cheap and they beat the ever-living-shit out of your shoulder unless you have a perfectly fitted shotgun. 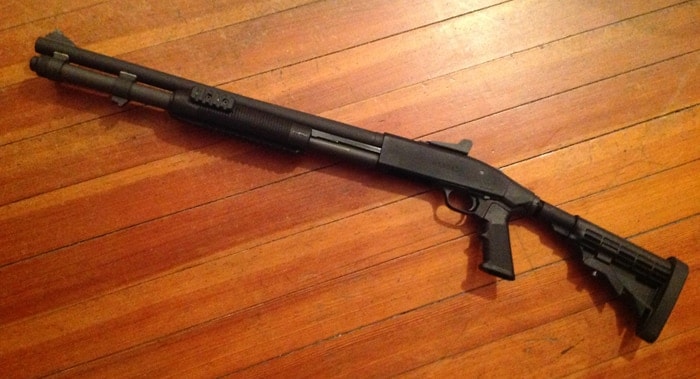 The Mossberg 590A1 is naturally tacticool. (Photo by J.P. Anderson)

The best choice for most people looking for a home defense load is the most expensive: buckshot. Contrary to its name, buckshot is best employed against two-legged opponents, hunters who wish to harvest deer use slugs. What makes buckshot so bad-ass? Imagine being able to pull the the trigger on a 9mm handgun three times as fast as Jerry Miculek, with the same precision. Would you use anything else? No. When you pull the trigger on a shotgun firing double ought buckshot you’re delivering eight .33-caliber pellets instantly. Couple that with a semiautomatic shotgun and you have some truly devastating power at your fingertips.

The shotgun is ideal for the shooter who hates to shoot twice. While no handheld weapon is guaranteed to put down every opponent every time, the shotgun comes very close with proper ammo selection. Compared to handguns and carbines, the shotgun has the lowest initial cost, the best chance of instantly incapacitating an opponent (with proper ammo), but is the most difficult to reload. Keep this in mind when choosing a home defense gun; if there was a single answer to all home defense scenarios wouldn’t every gun-maker being selling the same thing?