Shotgun shells can be tricky to handle. Whether you’re busting clays or running and gunning, or just spending some time in the field, the size, shape and weight of shells can really slow you down.

There are many shell carriers on the market to help organize your ammo, but there’s nothing quite like the Gunner’s Mate.

While still just a concept, the Gunner’s Mate is a clever new way to organize, carry, transport and store shells unlike the rest. Simply put, it’s a magazine with a belt loop. Designed to be easier to use than bandoliers or shell pouches, the Gunner’s Mate keeps your shotgun ammo all in one place and always pointing in the right direction.

The Gunner’s Mate uses a lightweight but rugged polymer design that hold eight 2 3/4-inch 12-gauge shot shells in a single stack package. It’s an ambidextrous design with a center grove wide enough room for gloved fingers while still providing the retention necessary to hold shells in place when knocked around or dropped.

Because the Gunner’s mate uses a front-facing loading and unloading port, users don’t have to worry about rimmed cartridges binding.

The design incorporates a long clip that can be used with pants, belts or anything else with pockets and is MOLLE-compatible for people who use shotguns on the job. 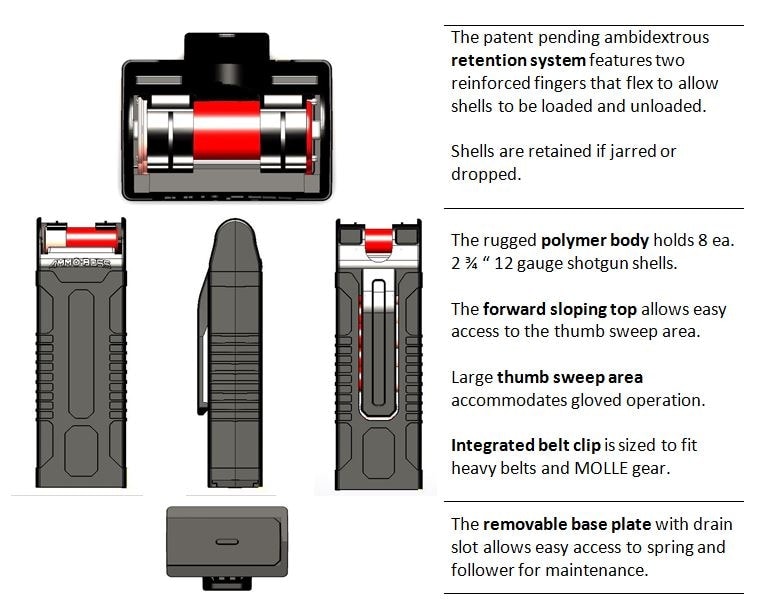 Ammo Boss is also on the lookout for suggestions and criticism with the design. The company wants the final product to work perfectly and include all the features and options contributors want.

This is a clever idea and we want to see Ammo Boss succeed in making the Gunner’s Mate a reality.

The Indiegogo campaign is looking for backers willing to pledge support in increments as small as one dollar. People who pledge $40, $78 or $114 will receive one, two or three Gunner’s Mates when the start rolling off the line along with an Ammo Boss morale patch.

The campaign is offering 350 “Door-Kicker” packages for $108. Door-kickers will be rewarded with three Gunner’s Mates, a morale patch and the option to weigh in on the final design.

“During the campaign, the Elite Door Kickers will be given the opportunity to participate in a special live web conference designed to help us put the finishing touches on the overall design,” explained Todd Luebke, the inventor of the Gunner’s Mate. “We can’t promise we’ll incorporate every suggestion, but Gunner’s Mate will go into production with your fingerprints all over the final design.”

“The Gunner’s Mate’s unique patent-pending design gives almost any 12-gauge shotgun user an edge when it comes to quickly reloading their tube fed or break open gun. The Gunner’s Mate is easy to use, portable and requires no special training or modification to your firearm. By participating in our campaign you will feel good knowing that you’ve supported one of the few firearms accessories ever offered via crowd funding and help strengthen the American economy.”

Luebke is no amateur manufacturer. Frustrated with the lack of SKS accessories, Leubke started Strike Hard Gear and now makes and sells accessories for the Simonov carbine and other Russian surplus guns.

One hundred percent of the project will be made in the U.S., from the final design to the molds, tooling and production. All rewards include shipping.

If the company exceeds its target crowd-funding goals it’ll start working on different models of Gunner’s Mates, with options for different calibers. Because the design is friendly towards rimmed cartridges, it’s possible to make Gunner’s Mates for revolvers and lever guns, too, not just shotguns.

If you want to learn more about the Gunner’s mate or are interested in contributing to the crowd-funding campaign, head over to Ammo Boss’ Indiegogo project.