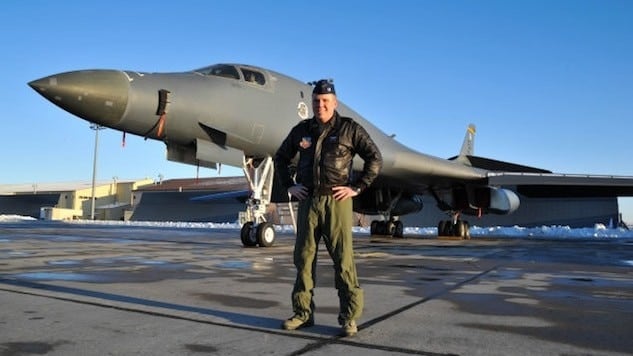 Capt. Mark Gongol was a passenger aboard a commercial when the plane’s captain lost consciousness. He quickly stepped in and helped bring the plane safely to the ground.

An off-duty Air Force B-1B Lancer pilot who was a passenger aboard a commercial 737 helped safely land the plane after the captain suffered a heart attack late last year.

Capt. Mark Gongol, 13th Air Support Operations Squadron assistant director of operations at Fort Carson, was on United Flight 1637 with his wife and daughter last December when the engines throttled back to idle mid-flight. The flight attendants began making some disconcerting announcements and when Gongol learned the aircraft’s captain had become incapacitated, he quickly stepped in and saved the day, Air Force Space Command reports.

Pilots are trained to constantly assess the situation whenever they are in the air, running through possible emergency scenarios and coming up with appropriate plans of action. While Gongol was a passenger that day, he was doing just that.

“Every pilot thinks ‘what would I do if this all goes wrong’ on an aircraft they are not controlling,” said Gongol. “As a professional courtesy, we all know the aircrew at civilian airlines are extremely qualified, but as a byproduct of being a pilot, I always have a heightened awareness when flying. However, I never thought I would be in the situation I was in.”

As the 737 cut through the air, the flight attendants began asking if there was a doctor on board.

“Over the public address system, a flight attendant asked if there was a doctor on board the plane,” said Gongol. “A few more calls went out for medical professionals and the flight attendants were all hurrying to first class with their beverage carts and first-aid kit.”

A few minutes later, a different call came over the speakers, “are there any non-revenue pilots on board? Please ring your call button.” That’s when Gongol snapped into action.

“After they moved the pilot, I was asked by the first officer, ‘are you a pilot,’ which was quickly followed with, ‘what do you fly,’” said Gongol. “I knew she was in a serious situation and that question gave her 5 seconds to judge if I would be useful. I also had about 5 seconds to asses her, ‘was she panicking, or was she okay to fly the aircraft?’ We both finished our silent assessments, she made the right judgment and told me to close the door and have a seat.”

“She was calm, but you could tell she was a little stressed. Who wouldn’t be?” said Gongol. “At the beginning, I interrupted her flow of operations, but we figured everything out extremely quickly. She was very impressive.”

Gongol brought the plane down safely and helped save the lives of his family and 151 other passengers, along with six crew members.

“I saw nothing but the finest professionalism under pressure out of the flight attendants, the nurses and the first officer,’ said Gongol. “Everyone aboard the aircraft remained calm, there is no doubt in my mind this contributed above all else to our successful outcome. In my opinion, any military pilot would have done the exact same thing I did.”