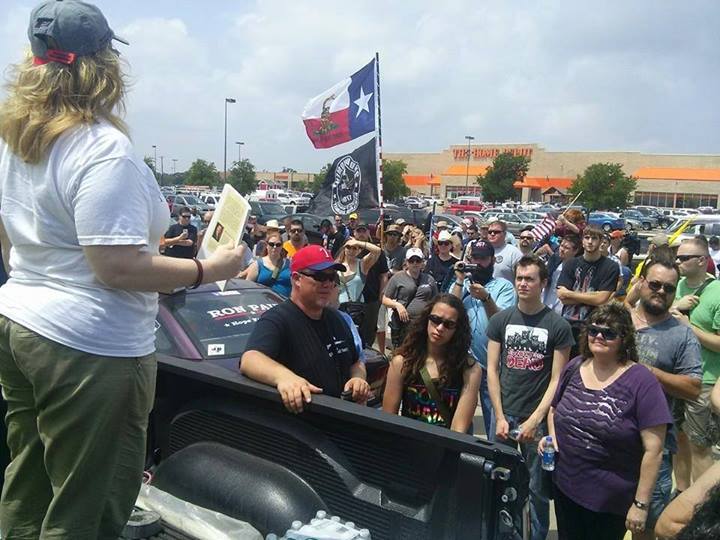 Open County Tarrant County is now under investigation for illegal gambling in association with a raffle held this last weekend at an event at a local Home Depot. (Photo credit: Facebook)

In the ongoing saga surrounding Open Carry Tarrant County and their quest to bring expanded gun rights to Texas, local police are investigating the group on suspected gambling violations.

The investigation, according to reports, stems from an event held last weekend at a Home Depot in North Richland Hills, Texas. While the event itself has drawn the customary flak from gun-control groups, it also garnered the attention of local law enforcement due to a raffle that was held.

“We are investigating the raffle that did occur at the rally on Saturday, May 31st,” said Investigator Keith Bowman with the North Richland Hills Police Department.

The problem comes from the wording of the state’s gambling statutes in which some forms of raffles are illegal.

Texas law states that a raffle or lottery in which “one or more prizes are distributed by chance among persons who have paid or promised consideration for a chance to win anything of value,” not authorized by the Texas Lottery Commission, may be a violation of the law.

Violation of this statute is a Class A misdemeanor offense, punishable by a $4,000 fine and/or a year imprisonment.

The law further states that those who participate in an unregulated raffle or lottery could be guilty of a Class C misdemeanor, which carries a fine of up to $500.

The Texas Attorney General’s office maintains a consumer raffle website that outlines the exemption process and guidelines for qualified organizations to hold up to two raffles per calendar year, with certain specified restrictions. A qualified organization must be either a nonprofit religious group, emergency medical service, volunteer fire department or been established for three years and is a Section 501(c) charity.

It is unknown at this time if Open Carry Tarrant meets one or more of these requirements.

“The group was advised prior to the raffle that there were concerns in the manner in which it would be held,” explained Bowman. “They said they were going to discuss it amongst themselves and make a decision. On Saturday, officers were advised by supervisory staff that, since the raffle was being held, to take an offense report to begin the investigation.”

According to their Facebook page, Open Carry Tarrant had around 15 attendees at the event. Among the items raffled were T-shirts, blackpower revolvers and ammunition. Speakers, including Felicia Whatley, Libertarian candidate for Texas House District 91, addressed the group.

For their part, the characteristically vocal gun-rights group has not issued a statement or comment on the apparent investigation by the North Richland Hills Police Department.