A soldier adopted a bomb-sniffing dog after she saved his life during a tour in Afghanistan.

Staff Sgt. Julian McDonald sent in Layka, a bomb-sniffing dog, to clear a building. While inside, Layka encountered an enemy combatant and was shot four times. But that didn’t stop her from subduing the shooter and protecting her handler, Huffington Post reports.

Layka was seriously injured, but survived, and McDonald felt immediately like he needed to fix her. 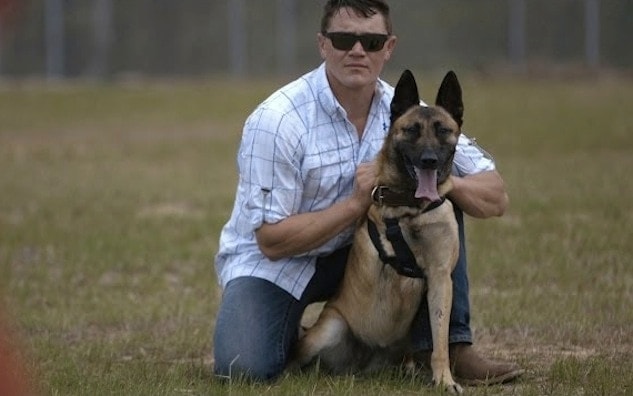 Staff Sgt. Julian McDonald said Layka has adapted well to her environment, and sometimes she even helps train other military dogs.

“On the day Layka got shot in May, instantly I felt the sense of urgency to fix her,” McDonald told National Geographic. “I owe this dog every moment I have from here on out with my son, with my mother, with my family. I owe her everything.”

Even though some thought Layka was too aggressive to be in a family environment, McDonald adopted her anyway, and said she’s been nothing but completely sweet.

“If you bring them in to a home environment they will become a product of that environment,” McDonald said. “Because all animals learn to adapt and survive, and that’s ultimately what they’re doing: coming home, adapting and surviving, and becoming a part of the family.”