U.S. citizens jailed in Honduras and Mexico due to accidental gun cases (VIDEO) 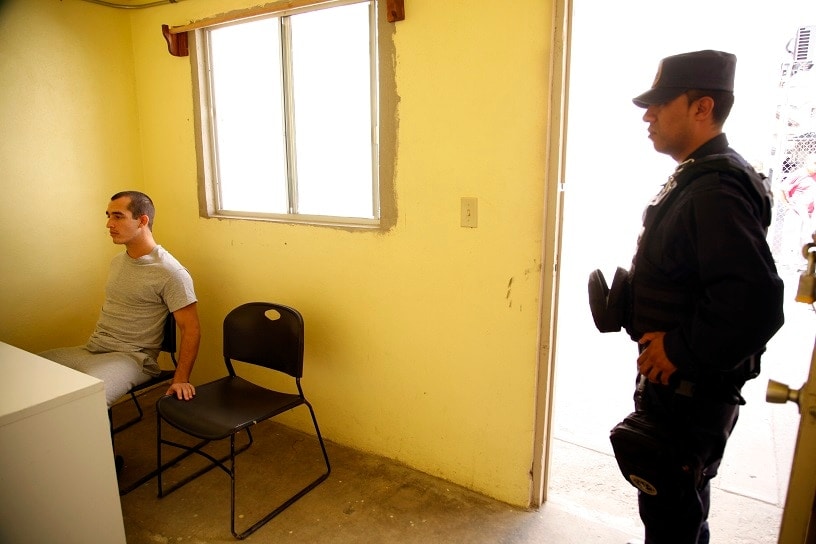 Marine Sgt. Andrew Tahmooressi, seen here in a Tijuana Penitentiary, has been jailed under weapons charges since April after he took a wrong turn and crossed the border into Mexico by accident. (Photo credit: AP Photo/U-T San Diego, Alejandro Tamayo)

Increasingly Americans traveling to neighboring countries on the continent are finding themselves on the wrong side of the law because of misunderstandings on guns.

A U.S. Marine with Post-Traumatic Stress Disorder has been in a Mexican jail since March and six Florida divers have been locked up in Honduras for a month due to cases of accidental firearm possession.

“They were threatening to take my guns, take my truck, and take all my possessions,” said Marine Sgt. Andrew Tahmooressi, who has been jailed by Mexican authorities since April 1.” And I told them, I said, ‘Hey, take everything you want. Just let me go back to America.’ They put me under arrest and that was pretty much it.”

Tahmooressi, 25, had been out driving in Southern California to meet friends and, after taking a wrong turn, found himself at a Mexican border checkpoint. Not intending to visit the U.S. neighbor to the south, the marine had three legally owned firearms in his vehicle at the time of the encounter.

This led to his incarceration as, unless properly declared and approved beforehand, bringing guns into Mexico by U.S. citizens is illegal.

While he is currently facing up to 21 years in prison under Mexican law, according to reports, he has already been excessively mistreated.

Among the allegations of abuse suffered by Tahmooressi at the hands of Mexican authorities in Tijuana’s La Mesa Penitentiary include a sustained neck wound requiring hospitalization, being beaten by officers, and spending no less than 26 days chained in a four-point restraint.

State Department personnel have visited Tahmooressi regularly since he wrote an appeal to U.S. Rep. Duncan Hunter (R-CA) in April pleading his innocence and asking for help. These officials, as well as another congressman, Rep. Matt Salmon (R-Ariz.), have succeeded in having the marine moved to a second prison while they work on his release.

“It’s a state-of-the-art prison — in fact I made the comment to my staff person that was with me — that I felt that that prison is probably nicer than most of the America prisons I’ve been in,” said Salmon. “It’s very clean, it’s only a year old (and) they have him in a room by himself.”

Sgt. Tahmooressi is not alone in his nightmarish situation. In Honduras, authorities there have held a literal boatload of Americans since May. Six Americans, on a contract to improve fishing grounds in Honduras, have instead found themselves locked up for nearly a month when the Honduran Navy found a gun on their salvage ship. (Photo credit: Baynews9)

Last month, Florida-based Aqua Quest International, a marine salvage company, sent six of its employees down to the tiny village of Ahuas, along the coast of Honduras, on a contract to help lobster fishermen.

Shortly after they arrived, local officials in conjunction with the Honduran Navy stormed their U.S.-flagged salvage ship and found a gun stowed aboard.

“At no time was there any firearm that was undeclared,” said Stephen Mayne, brother of Robert Mayne, the ship’s captain. “We never had any intention of bringing a weapon into the country. It’s for protection when you’re out at sea.”

Nevertheless, the Honduran government didn’t agree and Mayne as well as five other Americans in his crew have been imprisoned in Puerto Lempira since May 5.

Mayne maintains that the company was there with the blessing of the government, on an arrangement that had been negotiated starting in 2011. Further, the company had signed a contract with the Mayor of Ahuas in February 2014 to begin work this summer.

To secure their release the company and supporters of the imprisoned divers are working with their local Congressional representatives as well as the State Department.

“This is just a travesty of justice,” Maine said. “We’re hoping the Honduran government can just step up to the plate, look at this situation, realize the absurdity of what they’re saying that we did and just release these guys immediately.”

While lawmakers and the legal teams are trying to free all involved in both Mexico and Honduras, these accidental inmates are not forgotten back home.

A Facebook page has been set up calling for the release of Tahmooressi while an online petition at the White House’s website in support of the jailed marine has garnered more than 121,000 signatures.

The Aqua Quest crew, meanwhile, also have their own Facebook page for support.