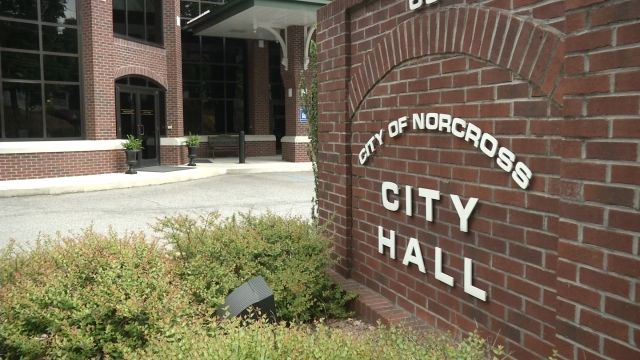 Norcross City Hall may soon be renamed a municipal court to turn it into a gun-free zone ahead of Georgia’s new pro-gun law taking effect in July. (Photo credit: CBS46 Atlanta)

The Mayor of Norcross, just outside of Atlanta, wants to change the name of the city’s municipal building to reclassify it as a court in an effort to place it off limits to concealed-carry permit holders.

This tactic would circumvent a new Georgia gun law, set to become effective July 1, that would allow lawful permit holders to carry inside city buildings with the exception of courts and detention centers.

Mayor Bucky Johnson is therefore asking the city council to officially re-name the building, built in 2002, the “Norcross City Hall and Municipal Court.”

“There’s no reason to bring a gun to city hall,” Mayor Johnson said.

By the direction of the city council, city manager Rudolf Smith is preparing the name change resolution to submit to the June 16 council session. This re-branding, if implemented, would create a new gun-free zone in the municipal building.

According to Norcross Patch, the town’s city hall at 65 Lawrenceville Street contains departments for residents’ utilities and parking ticket payments and serves as the office of the mayor, police department, and city council members. The council chamber is also listed as a courtroom.

This last minute scramble to rename city hall is puzzling to gun-rights advocates in the state.

“Renaming their city hall to ‘Norcross City Hall and Municipal Court’ is not necessary if there is a courtroom in the city hall,” explained Jerry Henry, President of Georgia Carry to Guns.com Wednesday.

The sudden move to increase security at the facility, which Henry contends may be unneeded, is also curious.

“These people do not trust the state’s permitting process,” he stated. “They do not trust law-abiding citizens to exercise their constitutional rights. They do not trust their own citizens who voted them into office. But as usual, the local government leaders will attack the problem the same way they always do by spending perhaps millions of dollars of taxpayer money to keep this small amount of control over the citizens.”