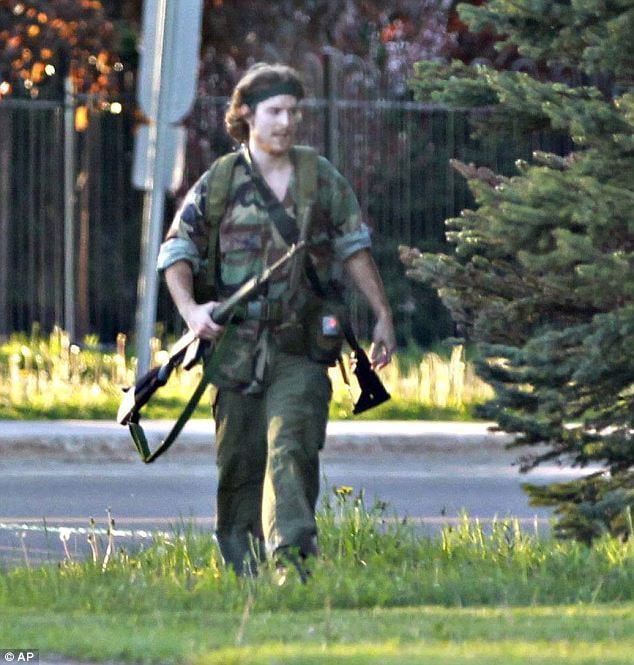 The manhunt continues for the gunman who fatally shot three Canadian police officers and wounded two others in the New Brunswick province Wednesday.

Justin Bourque, 24 – donning a bulletproof vest, fatigues and camouflage makeup and armed with a rifle and a shotgun – was first spotted in northwest Moncton. Residents called 911 and when police responded around 8 p.m., a deadly shootout ensued, BBC reports.

Bourque was not apprehended and has been at large ever since. Police have searched for him throughout the night and are continuing their search efforts. 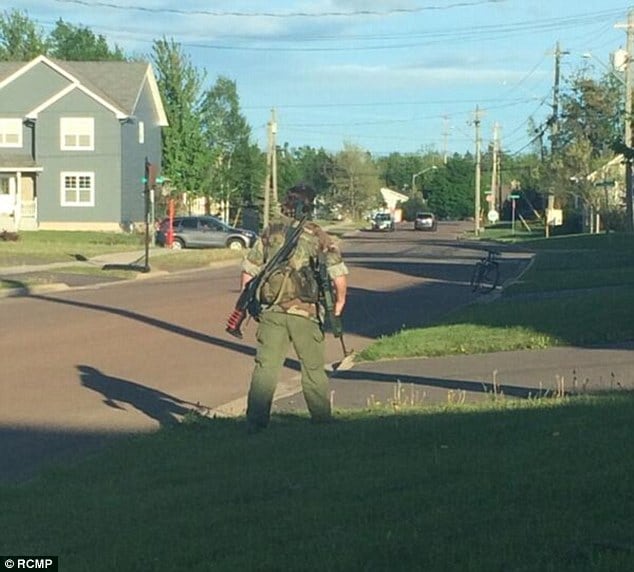 Around 5:40 a.m Thursday morning, the Royal Canadian Mounted Police took to Twitter and released a map of their search grid, urging residents to stay inside and lock their doors, L.A. Times reports.

While the police have released some information to the public for their own protection, they asked residents of the area not to post police movement to social media.

Schools, mail service, and government offices in Moncton have been shut down and students and staff have been asked to remain at home. Police have also cordoned off various roads in Moncton, Huffington Post reports.

Royal Canadian Commander Marlene Snowman said there have been several sightings of Bourque within the police search area, and at one point he was spotted entering and exiting a wooded area, Independent reports.

Police Constable Damien Theriault told the Associated Press Bourque is “believed to still be in the Pinehurst subdivision area of Moncton.”

Vanessa Bernatchez, 19, was in her backyard Wednesday evening when a neighbor alerted them there was a man with a gun outside. Bernatchez and her family rushed inside their house to see Bourque through their front window walking calmly towards a police officer.

Bourque shot the officer from a range of about 12 to 15 feet before casually walking away. Bernatchez captured the event on camera.

“He was extremely calm,” Bernatchez said. “That’s the worst part. He was just calm and cool and went off as if he’d do it every day.”

Moncton Mayor George LeBlanc first learned of the attacks from social media, and expressed his condolences for the victims’ families. 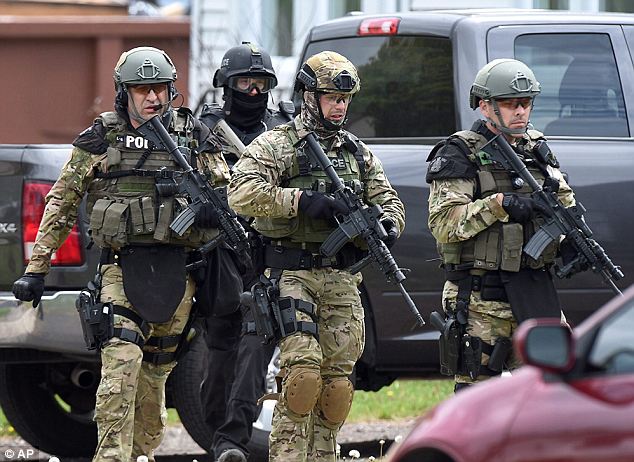 SWAT and other law enforcement personnel have gathered in Moncton from all over Canada to help apprehend Bourque. (Photo credit: Daily Mail)

“This is a terrible loss and a tragedy for the families and for all of us here in the city. [We must] pull together as a family to support those who have suffered,” LeBlanc said.

“You hear about these things happening other places,” LeBlanc added. “Moncton is such a warm an inviting community and it’s impossible to fathom.”

Police from around the country have joined in the search and are helping to comb the streets for Bourque, but Royal Canadian Mounted Police Commanding Officer Roger Brown admitted that, “Quite honestly, I don’t’ know where he is at this time.”