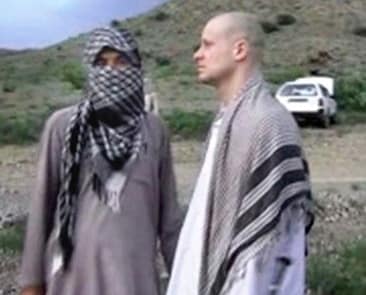 Sgt. Bergdahl with one of his captors shortly before he was exchanged for five Taliban fighters. (Photo credit: Time)

The evidence that Army Sgt. Bowe Bergdahl deserted his brothers-in-arms while serving as part of the global War on Terror in Afghanistan is mounting.

In a Thursday interview with six of his comrades, Fox News personality Megyn Kelly asked the crew to raise their hands if they believed Bergdahl deserted his unit.

All six hands went up.

“We knew that he had deserted,” said Evan Buetow, the leader of Bergdahl’s platoon which was stationed at Camp Geronimo in the Paktika Province of Afghanistan. Buetow went on to explain the circumstances in which they found his belongings, including his weapon, in his tent the day that Burgdahl went allegedly AWOL in June of 2009.

Based on the evidence at hand and the information the unit received in trying to locate Bergdahl — two Afghani children said they saw an American, alone and unarmed, crawling away in some weeds — it become apparent that he had deserted, the former soldiers stated.

Bergdahl fell into the hands of the Taliban, where he was held captive for five years until the Obama administration made the controversial decision to exchange Bergdahl for five high-ranking Taliban militants from Guantanamo Bay.

Yet despite the criticism he’s received, President Obama stands by the decision to make the trade and bring Bergdahl home.

“We had a prisoner of war whose health had deteriorated and we were deeply concerned about and we saw an opportunity and we seized it and I make no apologies for that,” said the president at the G7 Summit in Brussels on Thursday.

“We had discussed with Congress the possibility that something like this might occur, but because of the nature of the folks that we were dealing with and the fragile nature of these negotiations, we felt it was important to go ahead and do what we did. And we’re now explaining to Congress the details of how we moved forward,” Obama continued.

Meanwhile, Bergdahl’s teammates are receiving flak for telling their side of the story, including accusations that their labeling of Bergdahl as a deserter is politically motivated.

“This is not about politics,” said Buetow, in response to those claims. “This is about the fact that Bergdahl walked away from us, went to try to find the Taliban, and we know that for a fact. We were all there, and there is not one person you could find who would say that they don’t believe that — at least who was there.”

Buetow also addressed the idea that Bergdahl should be viewed as a hero, firing back at National Security Advisor Susan Rice who stated that the sergeant “served the United States with honor and distinction.”

“He’s not a hero, and he did not serve with distinction, and that’s a spit in the face to everyone who joined the Army and anyone who died looking for him,” exclaimed Buetow. What do you think their families think? They don’t get their loved one back like Bergdahl’s family.”

While the debate will continue on whether Bergdahl is a deserter, one thing that almost everyone agrees on is that we need to hear his side of the story. Currently, Bergdahl is convalescing at a U.S. military hospital in Germany.

“His health continues to improve daily,” Pentagon spokesman Army Col. Steve Warren said Thursday, according to The Associated Press. “He is conversing with medical staff and becoming more engaged in his treatment plan. He is resting better and showing signs of improvement.”

There is no timetable set for his return to American soil.