A former Colorado police officer was found guilty Tuesday of illegally killing an elk last year that he says had become aggressive.

On Jan. 1, 2013, former Boulder police officer Sam Carter fatally shot “Big Boy,” a domesticated elk that had become a beloved member of the community. He was charged and recently found guilty on nine counts. Carter said the elk had become dangerously domesticated and was aggressive, but prosecutors said he killed it for the trophy aspect, NBC News reports.

According to Daily Mail, defense attorney Marc Colin defended his client, saying Carter was only trying to protect the public.

“Sam Carter is not guilty of anything but trying to protect the citizens of Boulder from a nuisance elk,” Colin said. 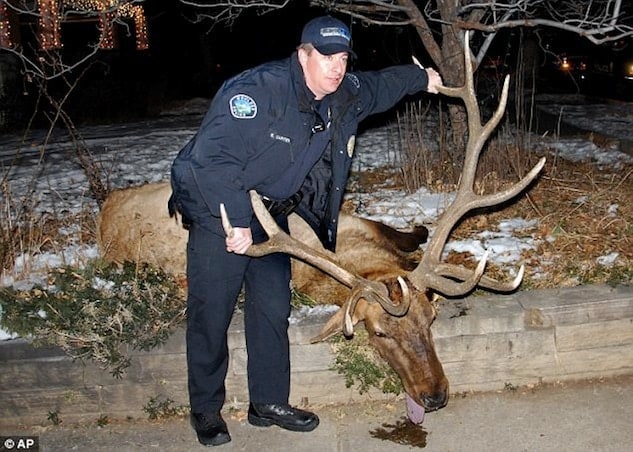 Former Boulder police officer Sam Carter faces up to six years in prison for illegally taking an elk while on-duty.

But according to Boulder County prosecutor Stanley Garnett, there was more to it than that. Garnett said Carter had turned off the GPS in his squad car before he shot Big Boy, then later falsified a tag that claimed the elk was road kill.

Garnett said the community took the death of Big Boy hard, but added Carter’s covering it up was equally bad.

“The fact that somebody would use the uniform and badge of a police department in such a case was equally disturbing to the community,” Garnett said.

One person who frequently saw Big Boy, including the day he died, said the elk was completely docile.

“The day he was shot, I was walking at Eighth and Mapleton, and he was at a house eating leaves,” said Mary Lee Withers. “My dog barked at him. He looked at us, then turned back to eating leaves.”

According to ABC News, Carter was convicted of three felonies: forgery, tampering with evidence, and attempting to influence a public official. He was also convicted of six misdemeanors: misconduct, illegal possession of a trophy elk, conspiracy to commit illegal possession of wildlife, unlawfully taking a big game animal out of season, and unlawful use of an electronic communication device to unlawfully take wildlife.

Carter is scheduled to be sentenced on Aug. 29 and could face as much as six years in prison.