Springfield is following up on expanding its recent XD-S series of pistols with the launch of the XD-S 4-inch .45 ACP. The company introduced a 4-inch version of the popular XD-S at the top of this year chambered for 9mm. Now the same pistol is available in John Browning’s caliber.

The one and only significant change to the XD-S 4-inch is the longer slide assembly. The original XD-S pistols are offered with 3.3-inch barrels in 9mm and .45 ACP, so people have been asking for and anticipating a .45-caliber 4-inch model since the day the 4-inch model was introduced.

With its service-length barrel users don’t have to sacrifice muzzle velocities and have more flexibility when it comes to ammo selection. The longer barrel helps to keep the muzzle blast down, making the 4-inch more controllable with less perceived recoil. 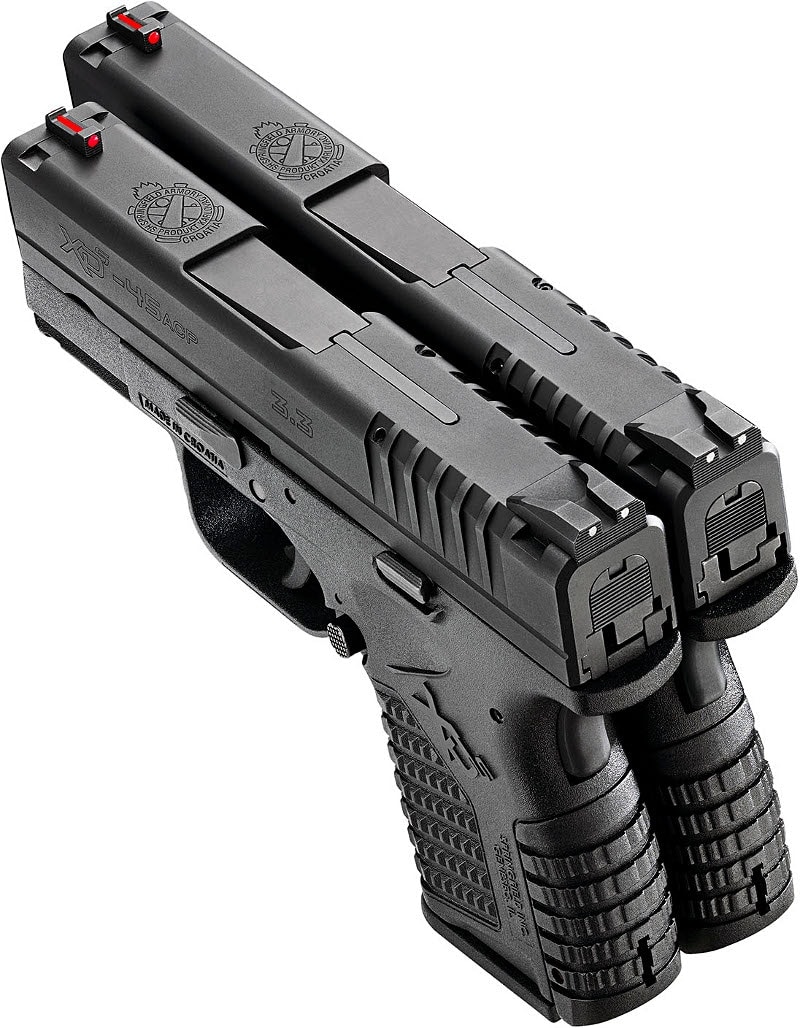 It also has a longer sight radius that should give users an edge in the accuracy department. The pistol comes equipped with a set of entry-level target sights, all-steel with white dots in the rear and a fiber-optic insert up front. An extension of the XD-M design, these guns are built for accuracy.

These guns are available in stores now and are a great option for someone looking for an all-purpose pistol, something that’s just as well-suited for time at the range as it is for concealed-carry and self-defense.

The XD-S 4-inch .45 measures in at just .9 inches across the grip. It’s a very flat gun with only the slide release and takedown lever protruding from the side. While the slide release is right-handed the XD-S 4-inch .45 has an ambidextrous mag release that’s flush with the grip. The grip surrounding the mag release is relieved to make it easy to depress when you want to drop the magazines but hard to accidentally push in.

Lightweight, thin pistols tend to have a lot of snap to them but the XD-S, and the XD-S 4-inch specifically, have an aggressive grip texture that really helps spread the recoil impulse across the user’s palm, not straight into the web of your grip. The XD-S 3.3-inch .45 is already one of the most manageable single-stack .45s on the market and the 4-inch model is even more so.

All new XD-S pistols have upgraded triggers. Last year, Springfield issued a safety recall on select XD-S pistols and ever since all XD-S models are equipped with the redesigned fire control group.

The XD-S 4-inch is one of the more interesting little guns to hit the shooting world lately. A sort of do-it-all gun, the XD-S 4-inch is a great option for someone looking to buy one gun for many roles. For people who want one gun and that gun’s gotta be a .45, this is an ideal candidate, whether it’s for range use, concealed-carry or nightstand duty.

The XD-S 4-inch .45 ACP can be found for around $550, give or take, and comes with one seven-round extended magazine, one five-round flush magazine and hard case full of XD accessories.

For more details and specifications head over to the Springfield Armory website. And if you’d like to buy one and support the USA Shooting Team check out this auction going on now. All of the proceeds from the sale of this XD-S 4-inch .45 ACP go to support the U.S. Olympic shooting team.