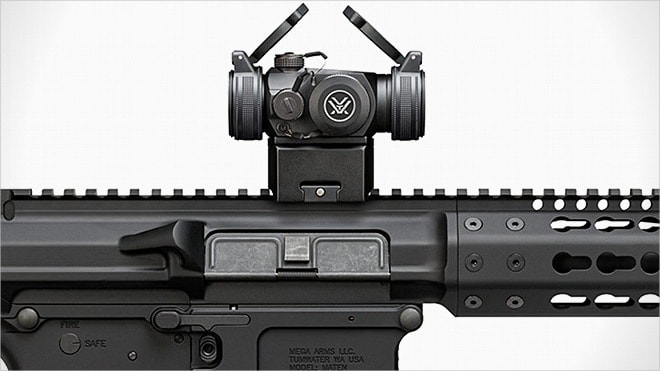 The Vortex Sparc has long been a staple for people looking for a low-cost, high-value optic that’s still a cut above the entry level. Its rugged design, simple controls and bright, crisp 2 MOA red dot have made the Sparc a popular option for many people working on a budget.

And the Aimpoint Micro T-1 has set the gold standard in compact red dot sights. Used by hunters, competition shooters, plinkers and military and law enforcement users around the world, the Micro T-1 raised the bar when it comes to durability, battery life and performance. 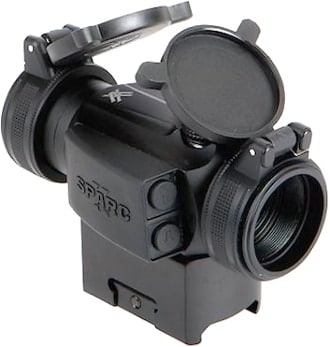 The catch is that this has been true for several years now. Technologies have emerged that are making newer products more attractive, even if they’re largely made by Aimpoint and Vortex.

With the introduction of the Aimpoint T-2 and Vortex Sparc II these companies are getting ahead of the game with newer, more competitive optics.

The changes to the Vortex Sparc are fairly incremental with a more efficient red dot that offers superior battery life, almost three times the battery life at full power. The Sparc II has a typical run time of 300 hours at full power and 5,000 hours at the lowest setting, up from 120 at maximum and 3,400 at minimum. That’s off the same CR 2032 battery.

The Sparc II comes with a modular mounting system that includes a high mount, a low mount and a spacer that can be combined for a lower-third co-witness (40mm), an absolute co-witness (37mm) or low-profile mounts at just 21mm or 18mm over the rail for non-AR-type rifles and shotguns.

It doesn’t look like the Sparc II comes with the screw-on double, which gives the red dot a fixed 2x magnification. However the price point remains the same as the original Sparc with an MSRP of $289. AR-15 News reports that vendors are already listing the new scope at around $200, making it very competitive on the crowded red dot market.

Details are still a little thin about the upcoming Aimpoint with a full announcement expected next week at the Eurosatory defense expo. 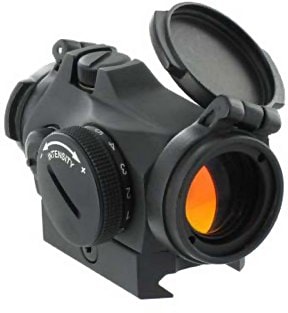 According to the Military Times the changes to the Micro T-2 will be less humble.

It appears that the new Micro will feature a redesigned body for enhanced durability, if that was even possible for such a hard-use optic as well as a new ruggedized turret design. The Micro series is already one of the toughest of the red dots on the market. These changes will ensure that it stays at the top as far as that’s concerned.

Another welcome change is the addition of front and rear flip covers. This is easily the biggest shortcoming of the Micro series, and many manufacturers have profited off compensating for the original Micro’s one weakness with bikini covers and mounts with integrated flip covers specific to the Micro.

Pricing is still unknown but the Micro T-2 is expected to take the place of the T-1, with a new lower pricing scheme for the T-1. Hopefully these changes will trickle down to the H-1, the more commercial “Hunter” option of the Micro series in time.

The T-2 is expected to hit the market later this year, with shipping sometime this September. The Vortex Sparc II is available now, and all the details and specifications are available on the Vortex website.