FN and FNH to consolidate U.S. operations into FN America 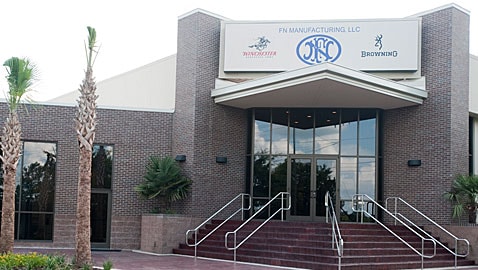 What currently resides outside the facility in Columbia, South Carolina.

The American side of Fabrique Nationale — FN Manufacturing and FNH USA — is consolidating into a single entity called FN America, ending the confusion once and for all.

The announcement came straight from the horse’s mouth. Philippe Claessens, CEO of the Herstal Group, the parent company located in Belgium, made the announcement on Friday.

“This merger will ensure a stronger, more agile organization that is better poised to meet current and future U.S. market challenges,” said Mark Cherpes, president and CEO of FNH USA.

Although the names will change, the facilities and locations will remain the same. The production side, FN Manufacturing, will remain in Columbia, South Carolina, and the business and management side, FNH USA, will remain in McLean, Virginia.

In the Columbia facility, the company develops and manufactures firearms for the military, law enforcement and commercial markets, including the M240, M249, M4 and M16 rifles; the FNP, FNX and FNS pistols; and the FN 15 series of rifles.

According to the announcement, the merger will streamline development of new and existing products, and customer service. Additionally, it will also enable the company to better manage the complete product and customer care life-cycles for its military, law enforcement and commercial business lines.

No word on whether Browning Arms Company and Winchester Arms Company, which also fall under the Herstal umbrella, will be affected by the merger.

This year marks the 125 year anniversary for the Herstal Group.