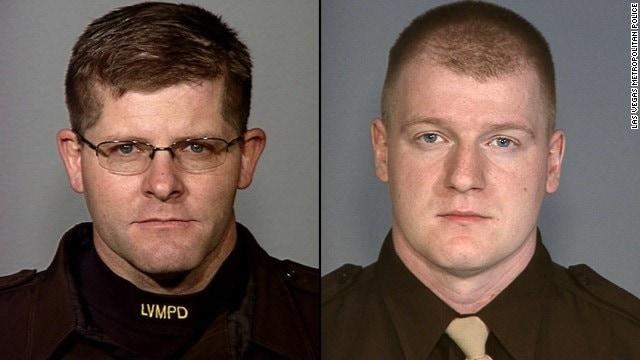 Officers Alyn Beck, left, and Igor Soldo were shot while eating lunch. Both were husbands and fathers. (Photo credit LVMPD)

A man and woman allegedly ambushed and killed two police officers in a Las Vegas restaurant before killing a third person and then taking their own lives in a bizarre incident Sunday.

The pair of uniformed patrol officers, identified as Alyn Beck, 41, and Igor Soldo, 31, were shot shortly after two currently unidentified suspects entered the pizzeria on North Nellis Boulevard, just before noon on June 8.

According to reports from the Las Vegas Review Journal, the female suspect shot Soldo in the head while he waited to refill a soft drink. The same suspect turned and killed Beck as he drew his sidearm and attempted to return fire.

“My officers were simply having lunch as the shooting started,” Sheriff Doug Gillespie of the Las Vegas Metro Police Department. “It’s a tragic day. We have lost two officers with young families.”

In a press conference Sunday, the sheriff related that both officers were married and had children, including, in the case of Soldo, an infant. Directly after the shooting, witnesses report that the suspects made statements to the effect of, “this is a revolution,” before draping the fallen officers with an item that is described as containing a Gadsden flag symbol.

After stripping the officers of their weapons and credentials, the suspects fled across Nellis Boulveard to a Wal Mart location, where they shot and killed an unidentified female bystander. Police are withholding the identity of that victim until after the family can be notified.

Metro police made entry to the retail store and briefly engaged the suspects, who fled deeper into the business.

After a lull in the shooting, police found the suspects, identified tentatively as a white married couple in their 20s, dead from apparent self-inflicted gunshot wounds in the back of the store. It is believed the female suspect shot the male suspect before turning the gun on herself.

Carolyn Goodman, Las Vegas’s Mayor called the attack “a senseless and cruel act killing three innocent people, two who dedicated their lives to protecting all of us in our community and one who was innocently going about her daily life.”

Both Cici’s and Walmart have issued statements on the tragic events that occurred at their businesses.

“We are deeply saddened by this tragic event and our hearts go out to the families and friends of the officers,” said Geoff Goodman, a vice president of CiCi’s.

“We express our deepest condolences to everyone who have been affected by this senseless act of violence,” said Walmart spokesperson Brooke Buchanan.