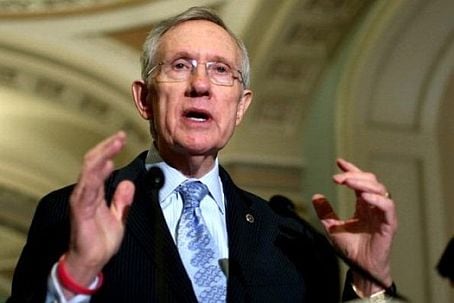 Reid, senior Senator of Nevada’s delegation in that chamber, voiced sadness for the loss of life in the incident, and then called for additional gun control laws.

“We in Congress, we do need to put in place legislation that helps prevent these deranged, these weird, these evil people who carry out such savage acts of violence,” said Reid Monday.

The legislative solution proposed by the Senator?

“Background checks so that people who are criminals, who are deranged can’t buy a gun,” explained Reid. “The American people are depending on us to pass legislation to prevent gun violence and safeguard communities, schools, and families.”

According to the senator, future incidents such as the Las Vegas attack could be mitigated by a move to require all firearms transfers, even those between two otherwise law-abiding citizens, be subject to a background check. At least one of the suspected murderers from this weekend’s violence is known to have a criminal record, although it is currently not known how he obtained the weapons used in the ambush.

“A step in the right direction would be universal background checks, so that people who are criminals, who are deranged, can’t buy a gun,” contends Reid.

This announcement from the Senate majority leader on a return to the debate on gun violence comes as the two senators from California have publicly announced a ‘Pause for Safety’ bill that would provide for “gun violence prevention orders.” That legislation was introduced following an incident in Isla Vista, California in which an attacker used knives, guns, and his vehicle to kill six and injure another eight.

Reid himself is no stranger to pushing such a measure as he included universal background checks as part of the baseline gun-control bill that the Senate debated in the spring of 2013 as a legislative response to the Sandy Hook shootings.

At the time Mark Glaze, then-director of Mayors Against Illegal Guns (MAIG), voiced the support for that group’s call for increased checks stating, “The background-check legislation has always been the biggest policy fix. It has the best politics attached to it and it’s our biggest priority.”

Even with Glaze’s departure and MAIG’s rebranding as Everytown For Gun Safety, the call for increased checks is still one at the group’s core.

Last fall, after the failure of the Manchin-Toomey amendment that would have required gun purchases over the internet and at gun shows to have a background check, Reid promised to bring it back for another vote.

“I think sometime next year we’ll revisit that issue,” Reid told members of Moms Demand Action for Gun Sense in America– now also part of the Everytown umbrella– in August 2013. “I’m almost certain of it.”

Monday’s statement may be the herald of Reid’s promised return to the issue.