Heckler & Koch is announcing a new service pistol for the commercial and law enforcement markets, the VP9.

Unlike the rest of their handguns the VP9 is a little different. It’s striker-fired, not hammer-fired.

Rumors have been bouncing around for some time that Heckler & Koch was developing a striker-fired pistol and they’ve proven to be correct.

It’s an approachable mainstream service pistol that draws on the aesthetics of the HK45 and P30 series and incorporates many of the same features including fully-ambidextrous controls, but it throws in a few new features in addition to the different method of operation.

Of course, Heckler & Koch is no stranger to striker-fired handguns. The company paved the way for the striker-fired polymer wondernine with the VP70 in 1970, more than a decade before Glock hit the scene. HK also developed the P7, which is still highly-sought to this day. 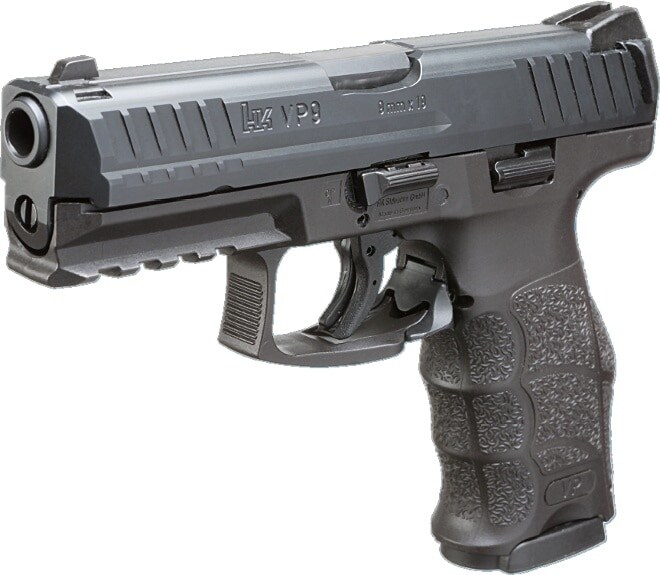 The HK VP9. The front control is the takedown lever, the rear is the slide stop. (Photo credit: HK)

But while the VP70 and P7 were both groundbreaking to the point of coming off a bit experimental, the VP9 is considerably more mainstream. Now that just about every major service pistol manufacturer offers striker-fired handguns, this is definitely a good thing.

The VP9 is fully-ambidextrous, with all the controls present on both sides of the gun, unlike many designs with partially-ambidextrous controls than can be reversed. This makes the VP9 not just left-friendly, it also means that every user can apply a single manual of arms to the pistol no matter what hand they’re shooting with.

Heckler & Koch has also tapped their existing and very comfortable grip design used in the company’s more recent guns for the design of the VP9. Like P30 and HK45 not only do the grips sport richly-textured ergonomic curves, it also uses interchangeable inserts to customize the grip to the user. Each VP9 comes with nine inserts to customize the grip to each specific user.

Another welcome carry-over is magazine compatibility. The VP9 uses existing 15-round 10-round reduced capacity P30 magazines. The slide profile is largely unchanged as well and the VP7 should drop right into P30 holsters.

There is one small, interesting change to the slide and that’s the addition of extended charging supports at the rear of the slide. Tucked between the serrations are removable extensions on both sides the slide to make racking the gun a breeze. Where they’re placed won’t interfere with many holster designs.

Of course the most important feature of a striker-fired pistol is a quality trigger. Heckler & Koch has designed the VP9 to be one of the best, with a constant pre-travel pull and a crisp wall to let the shooter know the trigger is about to break. HK advertises the trigger pull at just 5.4 pounds, something we’ll be happy to try for ourselves.

The trigger is relatively short, too, with a total travel of just 6mm and a 3mm reset.

Like all modern service pistols the VP9 is equipped with a rail, and the rail is rated for any lights, laser sights or other accessories weighing up to 5.6 ounces. 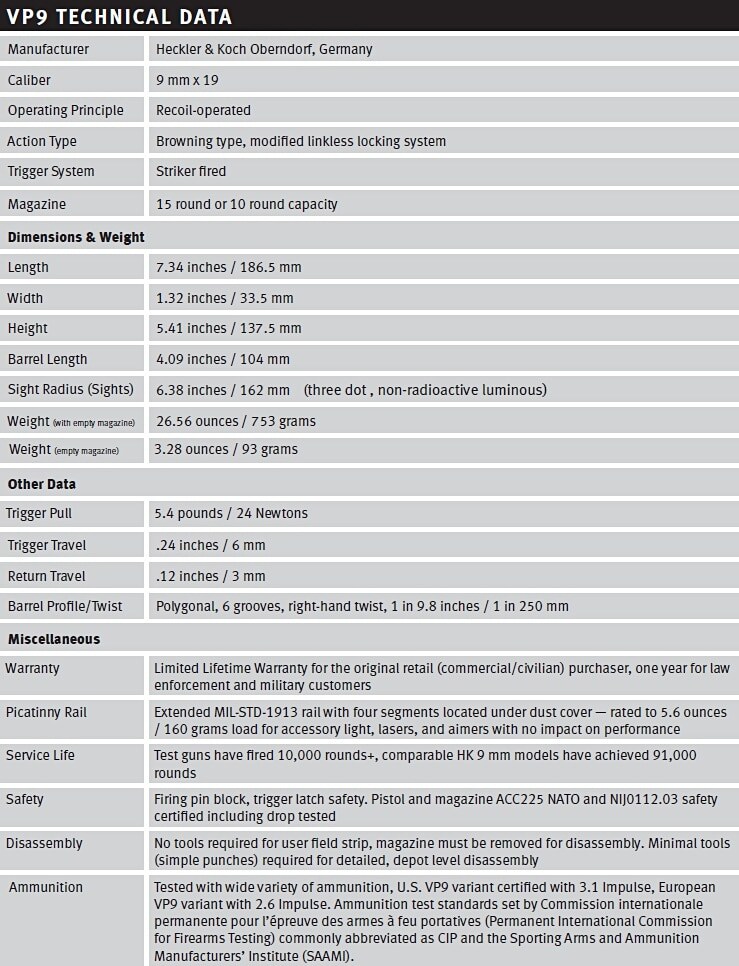 The VP9 uses a captive flat-spring recoil assembly for extra service life. Small improvements like these promise a longer maintenance cycle and in the long run, a lower operating cost. The pistol also has a polygonal-rifled colt hammer-forged barrel that should outlast just about every other part of the gun.

And believe it or not, the VP9 is designed to be a low-cost option from Heckler & Koch. The MSRP is $719, which puts it right in line with other mid-range service pistols, like the Walther PPQ or FN-America’s FNS and about $300 less than other HK pistols.

This means that people who would like to own an HK pistol but couldn’t deal with their premium prices have a solid option in front of them with the HK VP9.

The original VP70 was called the “Volkspistole,” or people’s pistol. It seems like the VP9 is a true spiritual successor, even with all the modern upgrades.

Every VP9 is covered by HK’s limited lifetime warranty.