Capacity and quick reloads or power and simplicity? Each has their advantages. (Photo by Jim Grant)

If you have children, chances are they sleep in separate rooms. They could be one door down from you or all the way across the hall. In the event that someone breaks into your home, you need to have a plan of action and prepare for the realities associated with rescuing your children while armed. The intruder may force you into a gunfight with the children nearby — truly a terrifying prospect. Although you can’t totally prevent this nightmarish scenario, you can mitigate it with training, preparation and proper weapon selection.

Handguns are, by far, the most difficult firearm type to aim and shoot accurately. They also fire less effective rounds than both shotguns and rifles. Pistols, on paper, appear to have no advantages over shotguns or rifles, but these fire-spitting einhanders offer tactical flexibility that outshines both long guns. Rifles and shotguns can be fired with some degree of success one-handed, but handguns were designed for it. While handguns might not have quite the capacity of rifles, some, like the Glock 17 with a 33-round extended magazines, come very close.

As you clear your home of trespassers and rescue your family along the way, you can open doors, flip light-switches and/or strike attackers with your free hand without the risk of losing control of your weapon. In these precarious moments you’ll likely be too adrenaline-fueled to appreciate the utility of your pistol and that’s how you know for certain you made the right choice. In the same vein as buying a properly fitting pair of shoes isn’t noticeable unless you  previously were sporting a pair a size too small, having the right tool for a job just means you can concentrate on the job rather than the tool. An overly-complex pistol won’t be an issue until you’re trying to clear a jam while trying to save your children, if you’re worried about this try something like a Ruger GP100. 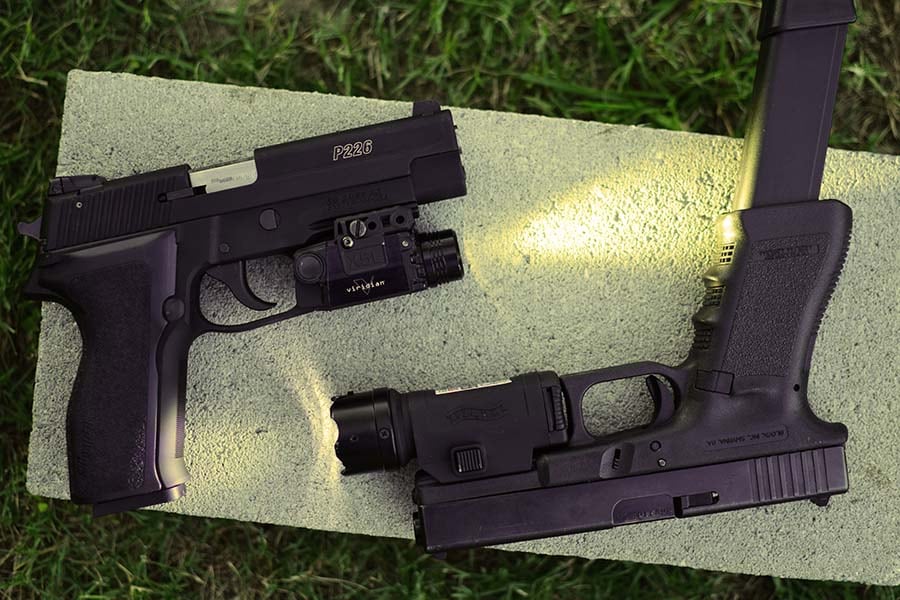 Polymer or steel, a good light and extended magazine will elevate your HD handgun to incredible. (Photo by Jim Grant)

If you don’t believe weapon retention is a significant concern, grab an airsoft gun or a plastic blue gun and have a friend hide behind a random doorway in your home with the goal of grappling the weapon away from you. Then walk through your house with your plastic rifle or shotgun in one hand and try to keep a bead on what’s in front of you. When your friend tries to take your gun from you, chances are they’ll get both hands on it and easily wrestle it away, seeing as you only have one hand on it and your friend has, most likely, surprised you with the grab. Now you’re defenseless.

There are techniques to combat this, like kicking a door open, backing up and “slicing the pie,” but these take time and still aren’t as effective as having a pistol in your dominant hand while opening doors with your support hand. Although a pistol is just as easy for someone to take once they have both hands on it, its smaller size makes it more difficult for them to do so and gives the user better maneuverability, especially in cramped quarters. Furthermore, since most handguns are designed to be manipulated and shot one-handed (and most ambidextrously) if your dominant hand is injured you can still use a handgun to engage or at least suppress assailants. But do so as your own risk and remember that you are responsible for every bullet fired.

You’ll need this maneuverability when you’re attempting to ferry your loved ones to a central location as you wait for the police to arrive. If you’ve ever had to convince a cranky toddler to eat his/her vegetables, imagine trying to convince them to be quiet and run down the hall to Mommy, without scaring them so badly that they start bawling their eyes out. Add to this the very real possibility that they may be caught up in a gunfight any minute and you will be at your wit’s end. Trying to do this while slinging an 8- or 10-pound rifle around will just compound your problems. 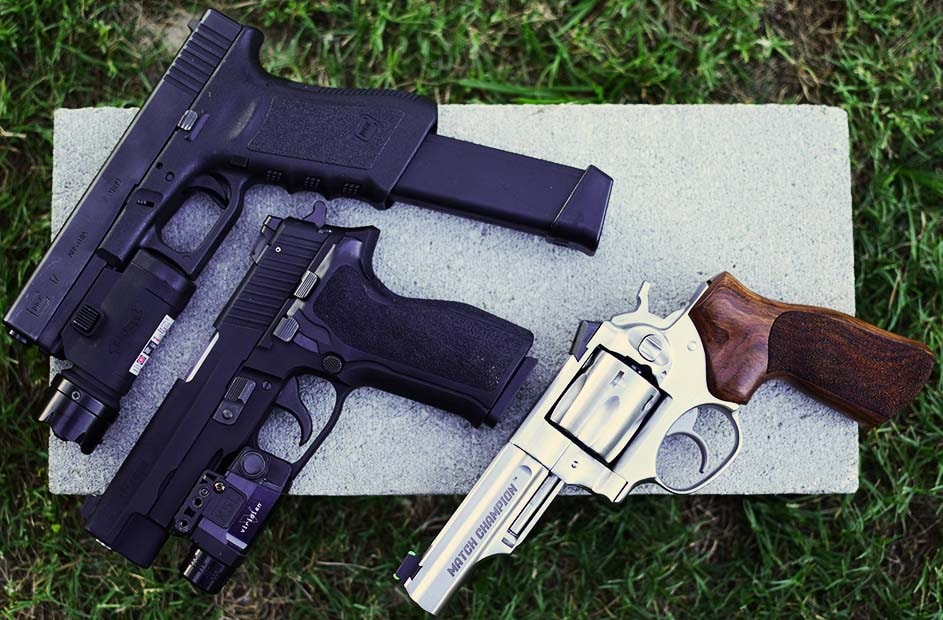 Each of these handguns will do the job, the trick is picking the best one for you and your family’s needs. (Photo by Jim Grant)

In an armed-intruder scenario, defense is always the best offense. The less you have to move, the less likely you are to be caught off-guard by an intruder. You don’t get to be Bruce Willis in Die Hard, you’re Davy Crockett at the Alamo. You don’t know what’s coming or if help will arrive in time or how long you have to get ready. Worst of all: you can’t run.

You might not wake up until the intruder is in your sleeping child’s room and have to deal with that nightmarish scenario. Or maybe you’ll get lucky and the commotion of herding your family into your designated safe room frightens the person off. The fact that you can’t know, means you have to train even harder.

Shotguns and carbines are great, but if you want a home defense gun you can clear your house with, while manipulating lights, doors and other devices, you should choose a handgun.