Obama: Nation should be "ashamed" on gun violence, calls for change (VIDEO)

In the wake of shootings in California, Las Vegas and Oregon, President Obama expressed frustration at lack of progress in preventing gun violence in the U.S.

The topic came up during a Q and A session with Tumblr founder and CEO David Karp Tuesday, where the president answered questions from Tumblr users.

“My biggest frustration so far is that this society has not been willing to take some basic steps to keep guns out of the hands of people who can do just unbelievable damage,” Obama said.

“If public opinion does not demand change in Congress, it will not change,” Obama said. “Right now it’s not even possible to get even the mildest restrictions through Congress and we should be ashamed of that.”

“We are the only developed country in the world that does this,” he said. “The country has to do some soul searching about this.” 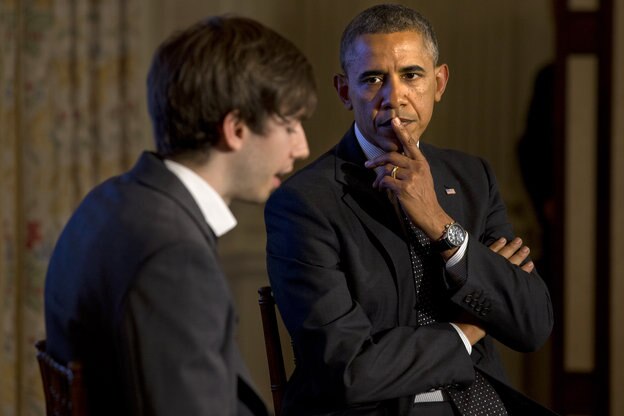 During forum discussion with the founder of Tumblr, President Obama answers a slew of questions ranging from financial aid to guns. (Photo credit: Jacquelyn Martin/AP)

The president went on to say that the nation should be “ashamed” of gun violence, and that Congress is “terrified” of gun rights groups such as the National Rifle Association. He also noted Australia’s large-scale gun ban following the 1996 Port Arthur shooting.

The ban resulted in some 700,000 firearms being surrendered to authorities. While there hasn’t been a mass shooting since the ban and gun deaths overall have declined, measures have not stopped guns from flowing into the country illegally.

In a report, the Australian Crime Commission said there are some 250,000 long guns and nearly 10,000 handguns unregistered in the country. Additionally, critics will be quick to remind the president that from 1996 to 2006, there was little to no change in crime statistics except for a increase in assaults, according to the Australian Institute for Criminology.

Meanwhile, the White House advised that the president is on the lookout to use executive authority “to try to make our communities safer.”

“The president’s goal is to look for opportunities to act administratively, unilaterally using his executive authority to try to make our communities safer,” White House principal deputy press secretary Josh Earnest said in response to a question about the Oregon High School shooting.

This comes just a day after Senate Majority Leader Harry Reid declared that legislation on universal background checks, which had stalled last year, was, “A step in the right direction,” to mitigate recent gun violence.

“We agree with the president that it is long past time for our political leaders to take action to prevent the gun violence epidemic that kills 86 Americans every day and we agree that background checks are a reasonable first step to keep guns out of dangerous hands,” she continued.

The NRA has not released a statement on the president’s commentary.