Crimson Trace is celebrating its 20th Anniversary with a set of Lasergips for 1911 pistols. This new set of laser sight-embedded grips is designed for full-size 1911s and falls into the Master Series laser sights.

Only 1,000 of these limited-edition 20th Anniversary Lasergips will be made. They feature red laser diodes that offer solid battery life and good visibility.

“Crimson Trace recognizes that no personal protection firearm is fully equipped without a laser sighting system,” the company said in a press release.

The special edition laser sights are built into laminated Applejack grip panels with a red on black and grey pattern that stand out on their own but also have a distinctive Crimson Trace medallion insert that commemorates the anniversary. 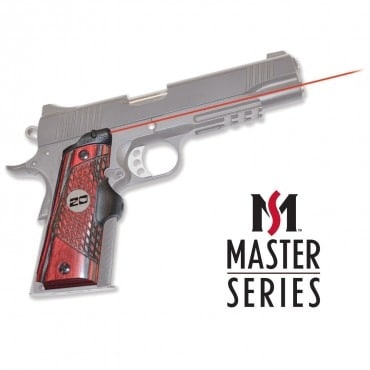 These grips use Crimson Trace’s “Instinctive Activation” system that powers on when a user picks up the gun. The grips have a band across the front strap of the host pistol where a power switch is located. Grabbing the gun and activating the laser sight are achieved in one motion.

The Limited Edition Master Series grips are also made to fit 1911s with ambidextrous safeties for maximum compatibility with a wide variety of 1911 pistols.

Every set of Limited Edition Master Series grips comes in a limited-edition keepsake box that includes a certificate of authenticity. The certificate is numbered to match the grip’s serial number from one to 1,000.

The laser sights are available through Crimson Trace and have a suggested retail price of $479.

As far as technical specs go they are powered by a pair of 3-volt CR-2025 batteries and have a runtime of about four hours when used intermittently. The laser sights use a 5mw laser that operates at the 650 nanometer wavelength.

They are factory-sighted at 50 yards and will project a half-inch dot at that range.

If you’re looking for laser sights and want to stay classy, check out Crimson Trace’s Master Series. All the details and specifications can be found on the product page.

All Crimson Trace products are proudly made in the USA.