An off-duty Pennsylvania state trooper fatally shot a suicidal man who showed up at his front door armed with an airsoft gun earlier this month.

On the night of June 2, off-duty Trooper Brian Knirnschild opened the door to his Butler Township home to find his neighbor, Kristopher Barkus, 25, standing outside with what appeared to be a Beretta pistol, but what was later discovered to be an airsoft gun. Knirnschild ordered Barkus to drop his weapon. When Barkus aimed at Knirnschild instead, the trooper opened fire, Trib Live reports.

Barkus was struck in the chest and his brother, Bobby, drove him to Butler Memorial Hospital. He was then flown to Allegheny General Hospital, North Side, where he was later pronounced dead. 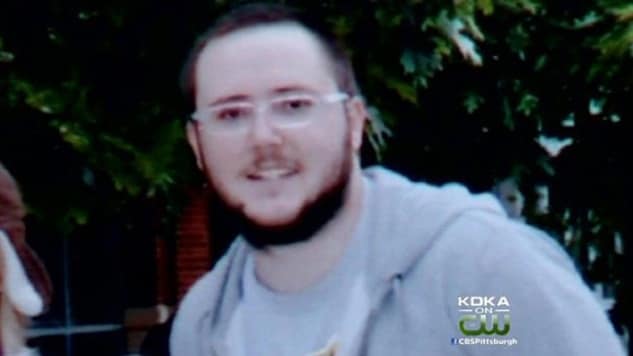 Kristopher Barkus’ family said he had suicidal thoughts and that before he left the house the night he was fatally shot, he had told them he was going to jump off a bridge. (Photo credit: CBS screengrab)

This wasn’t the first time Knirnschild and Barkus had met. Though the trooper had only moved into the neighborhood a little over a month ago, Barkus had already come to his house and initiated a confrontation several times.

Around a month ago, Barkus approached the trooper at his home and asked to be arrested. Several weeks ago, Barkus returned and was ordered away by Knirnschild. On May 17, Butler Township police charged Barkus with harassment, though it’s not certain if that incident was regarding Knirnschild.

But according to Barkus’ parents, their son, who was suffering from depression and health problems, was likely going to the trooper’s residence to seek help, WPXI reports.

“You’ve lost the biggest treasure you’ve been blessed with,” said Barkus’ father, Bob Barkus. “I believe he went to the neighbor’s house. He met him before [and] knew he was a policeman and he could help him.”

“We, and especially my wife, have been dealing with this for so many years… his health problems, trying to get him squared away,” Bob said.

Moments before Barkus left his home he told his family he was going to jump off a bridge. His brother Bobby followed him to Knirnschild’s and witnessed the shooting. His father Bob says he wishes he had gone after his son too.

“We love him and miss him dearly already,” Bob told WTAE. “He loved music, and he was quite accomplished with a guitar. He could sing as well, compose, write songs. He was port of the music of our lives.”

Lt. Eric Hermick said Knirnschild “fired to protect himself and his family,” adding that he’s “been a commendable trooper.”

Knirnschild has been placed on paid administrative leave while the investigation into the shooting continues.